I’ve been hard on Bill Davis over the past couple of days, and while he did not have a good game, the fact is that several players the Eagles rely on to play well did not.  Therefore, I figured I’d highlight a bad defensive play that was purely the result of players not doing their jobs; the Ryan Matthews 20 yard run.

Situation:  Game tied at 3.  4:49 remaining in the 1st quarter.  SD has 2nd and 8 at its own 9 yard line.  This is important to note.  SD began the possession with terrible field position (penalty on kick return after an Eagles field goal) and was still able to score a TD.  This play played a large role in the success of the drive.

Here is the pre-snap look:

I’ve illustrated the movement of the O-Line as well as the rush angles for the D-line.  Note Patrick Chung is in the box on the left, and rushes on this play.  Also, the blue lines are the resulting running lanes Matthews has after the play develops.

Above is the play just before Matthews gets the handoff.  Notice his running lanes.  Kendricks as one blocked, Ryans as another blocked.  However, nobody has sealed the left edge, which Matthews sees and capitalizes on.

Next, the handoff has been made and Matthews has chosen his lane (cutting back away from the direction of the line’s blocking).  At this point, Kendricks is the only Eagle (on screen) in position to make the play.  Cary Williams, of screen, has noticed the run and come out of coverage (this view is more instructive than the All-22, though it keeps Williams off-frame until next shot).

Below, we see Williams attacking and Kendricks pursuing.  This is the most important frame in the breakdown.  At this point, the Eagles have the play well-contained.  The LOS is the 9 yard line, so if the tackle is made, the resulting gain will likely be just 3-4 yards. 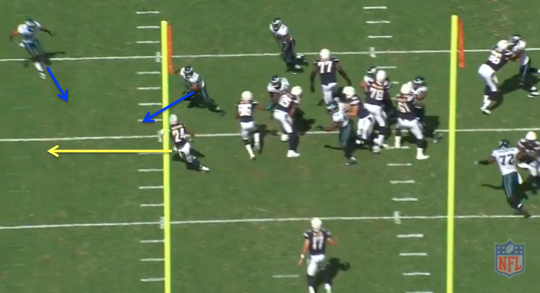 Look at the angles I highlighted above.  Put simply, they’re not good.  If Williams cuts off the sideline, Matthews has nowhere to go.  Instead, he pursues aggressively (not necessarily a bad decision).

Above, we see the result of the angles I highlighted in the last frame.  Kendricks is beat, though it’s not really his fault.  Both he and Matthews are running laterally towards the side-line, and I don’t think expecting Kendricks to match Matthews’ speed is fair.  The bigger issue here is Cary Williams.  His poor previous angle means the sideline is now open for Matthews; all he has to do is beat Williams to the spot. 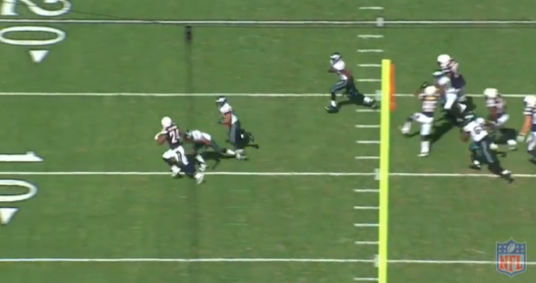 That leads us to…

Williams doesn’t make the tackle.  Contain is broken, so nobody else is in position to make the play.  A 3-4 yard gain has turned into a 20 yard gain, moving the Chargers from 2nd and 8 at its own 9 yard line to 1st and 20 at their 29 yard line.

Just to review, at one point the play looked like this:

Which led to this:

I still don’t understand Davis’ reluctance to incorporate the 4-3 into his defense, at least until the team has the personnel to commit to the 3-4.  However, if guys like Williams and Kendricks (to a lesser extent here), don’t perform, it doesn’t matter what defensive scheme the team runs, or how well blitzes are disguised.

We know Nate Allen isn’t good.  We know the backup CBs will be overmatched.  It’s wasted energy to lament those areas.

Guys like Williams and Kendricks, however, are fair game, and need to be much better.