Well that was….agonizing.  The offense simply didn’t do its job, if it had, the game would have been a blowout.  Not going to dwell too much on it, though.  Only thing really worth investigation is whether Foles had places to throw the ball instead of taking the sacks.

For now, some quick notes:

– One of the biggest issues the past few years has been the lack of impact players on defense.  My perspective is that, in general, you can scheme to score points, but need talent to prevent them.  The Eagles haven’t had that….until now (maybe).  Mychal Kendricks played a great game, and looks to have found some measure of consistency (his biggest issue last year).  Boykin, outside of the really stupid PR penalty, also played a very good game.  The development of those two players is HUGELY important for the future of the team, especially when you consider the very real possibility (hopefully) that the team won’t be picking in the first half of the draft for a while.  Fletcher Cox didn’t make many players, but it looked like he was seeing consistent double-teams.  If that’s true, then he’s doing his job as well.

– Jason Garrett made some very poor strategic decisions, to the Eagles advantage of course.  Punting on 4th and 2 in Eagles territory is just completely indefensible, especially when you consider how good the Eagles’ offense is (despite its performance yesterday).  It’s shocking to me that coaches still do things like that, when so much work has been done to show it’s clearly the wrong move.  According to Expected Points, from AdvancedNFLStats.com, Garret gave away MORE THAN A FULL POINT with that decision.  He also struggled with more than just 4th down calls…

– The Cowboys’ biggest advantage coming into the game was on Special Teams.  Moreover, their return man, Dwayne Harris, was healthy again and among the more dangerous return men in the league.  Yet….he brought just 2 kicks out of the end zone (averaging 32.5 yards on those returns).  Another huge strategic blunder.  It doesn’t matter that the kicks were in the back of the end zone.  As an underdog, you need to (a) up the variance, and (b) leverage your strengths.  They did the complete opposite by not returning every kick.  This isn’t an isolated occurrence either.  Look at this, from Jared Cohen, 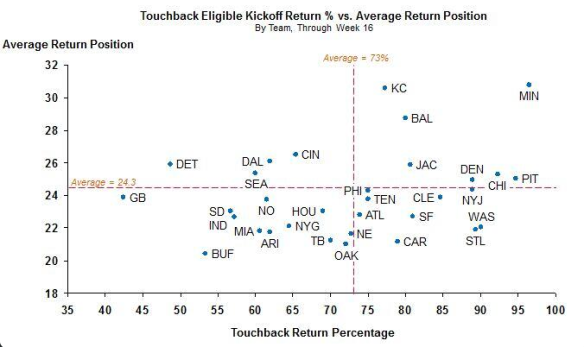 You can see Dallas in the upper-left quadrant.  They’re above average in returns, yet attempt them far less than average.  Yes, there is some cross-causation here (it’s possible they’re above average because the only return kicks that don’t go deep into the end zone).  However, remember they were big underdogs here, with a QB that couldn’t push the ball downfield.  Maybe they should have taken a shot at giving Dwayne Harris a few shots against a poor Eagles STs unit?  Yeah…but I’m sure happy they didn’t.

– Billy Davis….I’m done.  He’s at the top of the list as far as changes I’d like to see the team make.  The personnel still needs improvement, and blown coverages can’t get blamed on him, but he just doesn’t seem to have any feel for the strategic ebb and flow of the game.  He also seems to be completely ignorant of the risk/reward equation of blitzing in various situations.

The toughest part about judging coaches is that you never know if the players are actually executing what they’re told.  However, allowing the Cowboys, in a vitally important situation, to get Dez Bryant matched up one-on-one with Patrick Chung as a result of a simple, single-man pre-snap motion is absolutely ridiculous.  It shouldn’t happen. It CAN’T happen.

Also, when blitzes aren’t working, the answer is NOT to blitz more!  Here, Davis seemed to have no idea who he was playing against.  Kyle Orton, at this stage of his career especially, is a check-down, quick-read QB.  He’s not great, but if there’s a wide-open receiver, he’s going to complete the pass.  He also can’t push the ball downfield.  So why blitz?  If the QB is routinely taking 3-step drops, it doesn’t matter what blitz you call, there isn’t enough time to for it to get home.  Instead, Davis should have been happy to rush just 4 linemen and drop everyone else into coverage.  Orton’s not mobile, so the LBs are all free to man-up or drop into an underneath zone.

Against a QB with great accuracy (like Drew Brees for example), you can’t do this, because coverage is much more difficult.  Against Kyle Orton, though, the coverage doesn’t have to be perfect, he’s not that good!  He made one legitimately great throw all game (to Terrance Williams).  Other than that, his ball-placement was off, sometimes by a lot.  If that’s the case, the last thing you want to do is make things easy for him by leaving receivers uncovered (a side-effect of blitzing).

Most unfortunately, this isn’t a one-time occurrence; Davis has struggled with this all year.

– One last blitz point….it’s a high-variance strategy!  In other words, it’s something you should generally avoid if you are the favorite.  If you’re the better team, you don’t need the high-reward!  As a result, the payoff isn’t worth the associated risk.  As a significant favorite, it’s the OTHER team that should be forced to make riskier plays.

To be fair, though, I don’t think many DCs (if any) really conceptualize blitzing or general defensive strategy like this.  That’s not a good excuse for Davis though, it just means the whole profession needs some instruction.

– 10 wins, a division title, a home playoff game, the league’s top rated passer, the league’s leading rusher, the most 20+ yard plays in NFL history.  As I said in the pre-game notes, this season has been a resounding success.  We’re playing with house money now.

– The Eagles went 7-1 over the second half of the season.

– Drew Brees is legitimately great, and scares me regardless of where the game is, but getting him out of the dome really is a big deal.

– The Saints are 2-3 in their last 5 games.  It’s been a very difficult stretch (losses have come against Seattle, Carolina, and St. Louis), but still.  This team isn’t quite as good as the Saints you’re used to hearing.  That said, they have a point differential of +110, nearly twice the Eagles’ mark of +60.  (My first reaction to the -2.5 line is that it’s off by a couple of points).

– Despite that, if I told you pre-season that the Eagles were a 50/50 proposition to make it to the divisional round of the playoffs, my guess is you’d have been thrilled and/or called my insane.