The draft starts this Thursday, which means we have about as much information as we are going to get regarding scouting reports, projections, team interests, etc…  Normally, I don’t do much projecting for the draft. I’ve been pretty clear in the past regarding optimal draft strategy (i’ll try to repost those this week), and the major takeaway is: Do Not Fall In Love With One Player.   That’s arguable the single most destructive thing a team can do.  Nobody’s projections are perfect.  In fact, they’re so far from perfect that the margin of evaluative error likely outweighs the difference between most (or all) prospects within a given tier.

However, I do want to point everyone to a post over at BGN.  James Keane took my TPR rankings and a set of team needs compiled by SBNation local sites and created this probability-driven simulation for the draft.  The results are pretty informative, but they’re not perfect.  I encourage you to read the post and play around with the simulation (it’s interactive), but I’ll cut to the headline.  Here are the “most likely” players to be drafted by the Eagles with their 1st round pick: 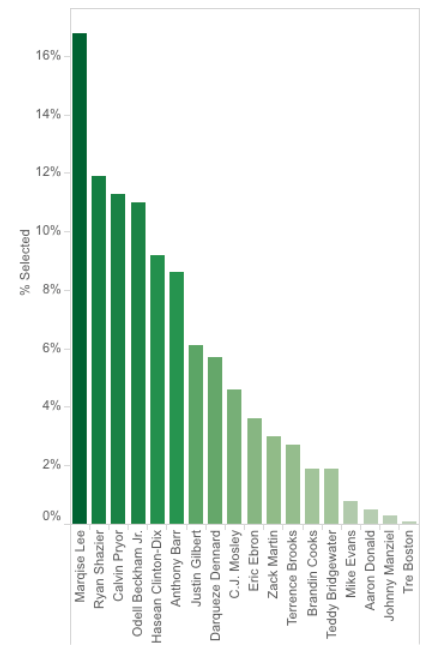 Now about that “not perfect” part.  The biggest issue I see with the above list is Ryan Shazier.  I don’t think he’s a legitimate target for the Eagles.  Unfortunately, the system (my rankings and team needs) don’t allow for the resolution needed to differentiate between weak-side OLBs and strong-side OLBs.  Shazier looks to be a good fit at the WILL spot in a 3-4 defense.  Of course, the Eagles already have Mychal Kendricks there.  I haven’t done any scouting, so perhaps Shazier can be a pass-rushing 3-4 OLB (Trent Cole’s spot), but I doubt it.

As much as I disagree with the idea of selecting a WR in the first round, that seems like a pretty good projection given what we know about the Eagles and Chip Kelly.  So those are the guys to watch if you’re looking to do some pre-draft research.

Now, a note on WRs.  Here’s why I don’t like the idea of taking one in the first round:

– The Eagles just cut D-Jax.  Many are suggesting that the team now NEEDs a new WR weapon.  I think that’s backwards.  Ideally, the Eagles would have felt comfortable cutting Jackson precisely because they felt like they DIDNT need him.  If the Eagles end up using a 1st round pick on a WR, then the opportunity cost of the D-Jax move skyrockets.

– The WR position is widely considered the “deepest” in the draft.  If that’s the case, why take one early?  If a position is truly “deep”, then it means the best value MUST lie in selecting one relatively later in the draft.  “Deep” means there are a lot of high-quality players and that the difference between the best guy and the 7th best guy (just throwing numbers in there) is smaller than normal.  Hence, taking one of the first guys is a relatively poor value.

– Lastly, Wide Receivers have the highest miss rate of any position in the 1st round, according to the research I did for the Hack the Draft post.  In other words, WRs carry the highest inherent risk.  Confidence in an individual player can not mitigate the systematic risk inherent in that position.  When you combine that with the relatively small contributions rookie WRs make, it seems like a poor strategy for a team that still has holes throughout the roster.

Officially, I’m just rooting for a value-maximizing pick that adheres roughly to the TPR rankings I developed.  Personally, though, I’d love it if that pick happened to be a Safety (as I’m sure most of you would).

4 thoughts on “Projecting the Eagles Pick”