Today’s the day.  Let’s go over the ground rules and lay out a few key things to watch for.

1) Do not fall in love.  Trading up for a player or reaching for someone is a surefire way to blow things.  Regardless of how confident you are in a certain player, we know that there is a significant chance that you’re wrong.  Failing to understand the uncertainty in your own evaluations/models is a killer, no matter what industry you’re in.

2) If a players “falls”, there’s usually a reason for it.  A “reach” pick, though, is usually just a bad pick.  This ties into the first point.   Below is a chart showing the biggest “reaches”, as I’ve defined them (difference from TPR), from 2010: 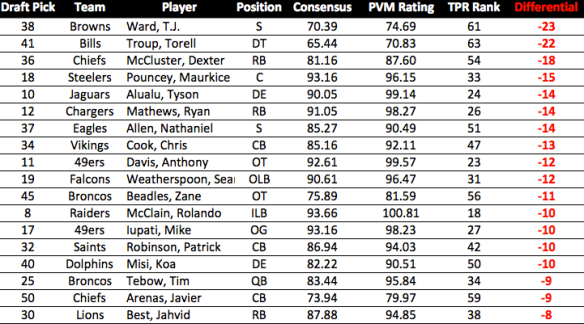 Some of those guys are good players.  Most of them are not.  Not only did most of these players “bust”, but they probably cost the teams that chose them more than they should have.  If there’s a player you really like, trade down until he makes at least some sense at that draft spot.  Chances are you are not smarter than the rest of the league.

3) The 6th – 7th round arbitrage.  Always trade down in the 6th round.  Look at these success rates:

Do you see the difference in success rates between the 6th and 7th round?  No?  That’s because there isn’t much difference.  Think about every draft pick as a lottery ticket.  The 1st round picks have the highest probability of “hitting” and those odds decline as you progress through the draft.  BUT, once you get to a certain point in the draft (somewhere around the 6th round), the odds flatten out.  At that point, everyone has roughly the same (low) odds of becoming a starter in the league.

I realize that every team gets to the 6th round and still has “fifth” round guys or better on their board.  That’s where self-awareness comes into play.  That late in the draft, NOBODY KNOWS ANYTHING.  If the player of interest was that good, he wouldn’t still be there.  As far as “free lunches” in the NFL Draft go, this is the most obvious.  Trading a 6th for two 7th round picks essentially doubles your odds of success.  It’s a no-brainer, and will be available for as long as there are over-confident GMs (so forever).

There’s obviously a lot more, but I’ve gone over most of it in the past and let’s face it, you won’t remember more than 2-3 of these anyway.

Things to Look For

– Teddy Bridgewater, Dee Ford, Ra’shede Hageman, Ryan Shazier,  Bradley Roby.  If you’re an Eagles fan, you should be hoping to hear these names called before #22.  As I see it,

Plan A for the Eagles is Mosley or Barr,

Plan B is Pryor or Clinton-Dix,

For one of those guy to all, we need some of the guys I listed to go earlier than expected.  Also watch the WRs and QBs.  A run on either of them is very good for the Eagles.

– Watch the QBs.  Last year, the top QB prospects, according to the “experts”, fell an astonishing distance in the draft.  This might be an anomaly.  Perhaps there’s information the teams had that the draftniks didn’t, in which case those guys didn’t really “fall”.  However, it’s also possible that GMs have adjusted to the increasingly passing-dependant league by holding QB prospects up to higher standards.  Maybe GMs, in general, are not as willing to overlook flaws at the QB position like they have in the past.  If so, that’s BAD for the Eagles, and we’ll see guys like Bortles, Bridgwater, etc.. fall.  Paradigm shifts are very rare, but that doesn’t mean we shouldn’t keep an eye out for them either.

– Trade down scenarios.  It’s really anticlimactic, especially when the Eagles have such a late pick, but a trade-down might be the best outcome for tonight.  Like I said, Plan A and B involve guys slipping a bit.  That’s unlikely.  Failing a shot at a top LB or S, moving back and grabbing another pick or two looks like a good plan.  As I showed earlier this week, the WR available at 54 will likely be nearly as good as one available at 22.  Additionally, while there are just 15 players rated 80-90 in my TPR rankings, there are 53 rated between 70 and 80.  Picking up another 2nd round pick would be well worth a trade-down if the defensive impact players are off the board.

– Trade up scenarios.  Lot of talk, and I hope that’s all it is.  If the Eagles do trade up, it means the probably made a strategic error (maybe a big one), but it DOESNT mean the draft’s a failure.  Trading up CAN be the right move, it just requires a degree of confidence that should be very rare.  But “very rare” does not mean “never”.  It’s possible, and if the Eagles trade up, I’ll obviously root for that to be the case.

– Lastly, Chip should have an advantage for this year and next.  Chip recruited and scouted a lot of these players.  This is the type of inside knowledge that couldlead to the type of confidence I talked about above.  If Chip can leverage his knowledge in the draft this year, it’ll go a long way towards building the foundation of a team that can contend for a long time.

That’s all.  It’s been a ridiculously long wait, but the draft is finally here.  Enjoy it.

3 thoughts on “The Rules for Drafting (Abbreviated)”