Today’s the day we find out whether the Eagles are legitimate contenders or not.  A win puts them in the driver’s seat for a top 2 seed in the playoffs and the bye that comes with it (hugely important).  Also, a bye likely means avoiding the Packers until the NFC title game.  On the other hand, if the Eagles get overwhelmed by the Seahawks, we’ll have a pretty good sign that the team isn’t quite ready to join the upper echelon of the conference (they’d have losses against GB, SEA, and SF).

With that, let’s take a look at a few key factors:

– The Eagles match up much better against the Seahawks than they did against the Packers.  The Seahawks are not a strong passing team.  They’re averaging just 192 passing yards per game, and while Russell Wilson has played very efficiently (94.7 rating, 15 TDs, 5 ints), the team is really powered by its defense and run game.

In other words, the Seahawks don’t seem equipped to exploit the Eagles’ biggest weakness, the Corners and Safeties.  Play-action will probably still be a problem, but there aren’t any premier WRs to worry about.

– On defense, this game comes down to whether or not the D-Line can get off their blocks and put some hands on Marshawn Lynch.  Lynch is one of the most difficult RBs in the league to tackle.  He’s second in the league in Yards After Contact (Murray is first) and leads the league in Misses Tackles (both from PFF).

That means the LBs need some help.  If the D-Line can’t do anything to hold Lynch up, he’ll likely make the rest of the defense look bad.  So Bennie Logan and Fletcher Cox, in particular, need to be at peak performance.

– On offense, Mark Sanchez needs to play very intelligently.  I’m worried.  On the outside, the match-ups clearly favor the Seahawks.  That’s not a huge problem for the Eagles though.  Sanchez has preferred Jordan Matthews in the slot as a target, as well as his TEs.  As I mentioned, I think the Eagles match up relatively well against Seattle.  If Sanchez can keep the ball in the middle of the field, and doesn’t get aggressive on the outside or downfield, the Eagles can score.

However, that game plan has a fairly predictable consequence.  The Seahawks will compress their defense, meaning gains will be short.  That leads to a lot of 3rd down plays, and the conversion rate of those plays might determine today’s outcome.  For the season, the Eagles are converting 43.72% on third down.  That ranks 10th in the league. However, that number has improved over the last 3 games (46+%), potentially due to the healthiest O-Line.

That, plus Darren Sproles’ obvious hatred of 4th downs, leads me to believe the Eagles will be somewhat successful.

– The Seahawks defense is drawing a lot of attention, allowing 6 points combined over two games will do that.  For the season, Seattle is allowing just 18.4 points per game.  However, the team has performed much better at home than on the road.  On the road, Seattle has allowed 30 (SD), 17 (WAS), 28 (STL), 9 (CAR), 24 (KC), and 3 (SF).  That’s good, but not spectacular, especially when you factor in the strength of those offenses.

More encouraging, Seattle is scoring just 21 points per game on the road.  The Eagles, meanwhile, haven’t scored fewer than 27 points in a home game this year and are averaging 36.7 ppg.  That’s a huge differential, but it holds the key to my optimism for today.

Home/Road splits are really hard to properly account for, but if they hold any informational value, things look good for the Eagles.

Full odds breakdown is below, I’ve got the Eagles winning a very close game.  Note that the line has shifted since I did the write-up and the Eagles are now 1 point underdogs.

My picks record to date:

Won the line, lost the O/U.  I had the Eagles performance pegged fairly well, though I have to admit Mark Sanchez exceeded my expectations.  The Cowboys, though, were much worse than I had projected.  That’s really good for the Eagles, but makes hitting the over tough.  Anyway, I’m now sitting right on .500 for the season, meaning I’m within range of my target >.550, but need to finish strong to hit it.  The readers, meanwhile, are having a great season, riding the market’s underestimation of the Eagles for the first half of the season. 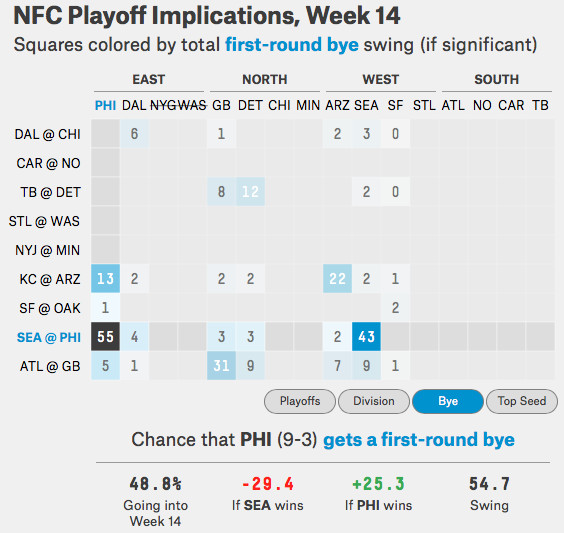 As you can see, a win puts the Eagles at close to 75% for a 1st round bye in the playoffs, while a loss drops them to below 20%.  With so much at stake, and some extra time to prepare, I think we’ll see peak Chip Kelly.  The question, of course, is whether or not that’s good enough to beat the Seahawks.

The Seahawks’ bandwagon is growing quickly, for obvious reasons.  The defending Champs have won 5 of their last 6 games and have held two division opponents and playoff contenders to a combined 6 points over the past two weeks.

Before we get to the breakdown, I do want to point out that wins over Arizona and San Francisco aren’t quite as impressive as they sound.  Arizona, a team many were skeptical about during its 9-1 start to the season, is falling apart and might actually miss the playoffs (tough schedule coming up).  San Francisco is a good team, but Colin Kaepernick has struggled.  The team’s offense is averaging just 19.2 ppg and its offense ranks 18th in the league by DVOA.  That’s a long way of saying the Seahawks’ defensive performance in these games has been impressive, but far from the otherworldly level you might have guessed based on what national writers are saying this week.

By DVOA, this is a very close matchup.  More importantly, the numbers clearly indicate the Seattle is a good team, not a great one.  By weighted DVOA, which overweights recent performance to try to gauge a team’s current strength, the Eagles (5th) are actually better than the Seahawks (7th).  The only unit that really sticks out above is the Eagles’ offense. Really surprising given what we believed heading into the season, but its the offense that’s holding this team back right now.

These teams have 8 opponents in common thus far.  Here’s how they performed:

Washington: Eagles won by 3 at home, Seahawks won by 10 on the road.  (Advantage Hawks)

That’s a 4-4 split if we just go by the advantages, but if we adjust for home field and add up the advantages, we get a Seattle advantage of 21 points.  Across 8 games that’s not that bad, especially when you consider the Seahawks entire advantage is driven by the GB comp.  Seattle played GB in week 1 while the Eagles got them in week 11.  That’s not an excuse for the Eagles, but it means the comp is less valuable informationally than if the games had been played close together.

Overall the advantage points to the Seahawks, but it’s narrow.

For the season, the Eagles are averaging 31.2 ppg, while the Seahawks are allowing 18.4 ppg.  The Eagles have yet to score fewer than 20 points this season, and at home they’ve scored at least 27 in every game.  Combining the factors above, I’m setting the Eagles projection at 24-25 points.

Together, that all points to a range of 20-24 points.  Overall, the Eagles are allowing an average of 23.8 ppg, while the Seahawks are scoring 24.8 ppg.  Once you factor in the home/road splits, that’s right in line with our range.  That gives us 20-24 points for the Seahawks.

On Special Teams, the Eagles have a big advantage, especially in the punt return vs. punt team matchup.  Since we expect Seattle to punt a lot, that could end up meaning a lot.  Given that, and the general disparity in STs DVOA, I’m giving the Eagles another 1 point to move the top of their range to 26 points.

That gives us a final score projection of Eagles 24-26, Seattle 20-24.  If we take the midpoints, it gives us a base-case of Eagles 25-Seattle 22. That’s a very unlikely final score, but we’re just looking for a direction signal.

Since the line is even, we get a narrow signal to take the Eagles. Not much room here, but that’s the pick.  On the O/U, we’ve got a range of 44-50 points.  The line is set at 48.5, so this is a tough call.  Eagles games have averaged 55 ppg this year, but Seattle’s have averaged just 43.4 ppg.  I like the way the Eagles defense matches up against Seattle, so I’m going against our Over rule and taking the under 48.5.

More generally, the Seahawks don’t seem positioned to take advantage of the Eagles’ weakness (defensive backfield).  With the D-Line playing so well, I like our chances to force punts and hold Seattle to FGs.  Seattle’s defensive strength on the outside is bad for Maclin/Cooper/Huff, but since Sanchez targets Matthews a lot anyway, that strength is mitigated.  If Sanchez can keep his focus on low-risk throws to the middle of the field, leveraging Matthews, Celek, and Ertz, I like the Eagles to win a close game.

If he tries to push the ball downfield or to the sidelines, though, we could see a number of turnovers…  Lastly, if the Eagles do that, expect Seattle to load the box, which will lead to a number of 3rd and 1-5 yard situations.  If that happens, Darren Sproles once again becomes the key to the game.