My odds breakdown is below, but it’s relatively inconsequential if you’re not betting the game.  Washington is TERRIBLE.  According to Weighted DVOA, they’ve been the wort team in the league over the past few games.  In other words, this game shouldn’t be close.

I know a lot of people are down on the team after the previous two weeks, but the pessimism is a bit overdone.  We knew coming into the season that the Eagles were a good, but flawed, team.  Nothing that has happened since then changes that assessment.

That said, the Eagles still have a good chance at the playoffs.  I’m guessing everyone is familiar with the pathways, and clearly the most realistic one involves Dallas losing tomorrow.  Given the spread, Dallas has about a 55% chance of winning the game.  Not too different from a coin-flip, so no reason to be hopeless just yet.

– Mark Sanchez is not a good QB.  We knew that.  However, by DVOA, Washington has the worst pass defense in the league.  If Sanchez just plays a mediocre game, he should still end up with a very nice stat-line.

– Washington has the worst Special Teams unit in the league.  The Eagles have the best.  That means field position should benefit the Eagles greatly today, giving the offense a head start.  In particular, Washington’s kickoff and punt coverage teams are awful.  They kick touchbacks just 37.1% of the time.  So they’re bad at covering returns and allow a lot of them.  Eagles returners might have a very big day.

– RG3 is playing for Washington, and his headline stats have been OK.  He’s completing nearly 70% of his passes, and has a rating of 89.8.  If we dig a little deeper, though, we see some serious weaknesses.  He’s taking sacks at a rate of 15.7%.  The Eagles are sacking opponents at a rate of 8.4%, second best in the league.  Put those together and we get a recipe for a dominant day by the defense.  RG3 has also thrown just 3 TDs in 150 pass attempts (2.0%).  That’s VERY low impact.

– Let’s not belabor this game too much.  The Eagles will almost certainly win. They have a close to 80% chance according to the spread, which I think understates thing a bit.  Washington is a train-wreck and the Eagles are still a good team, despite consecutive losses.  Moreover, the Eagles should be pissed about their recent performance and anxious to prove they can still beat up bad teams.  Remember, outside of the first Washington game, the Eagles have performed very well against bad teams.  Here are the win margins against teams at the bottom of the league:

My picks record to date:

Uggh.  If we go back to the first matchup, the only worry was Dez Bryant.  He’s an elite receiver, and clearly a terrible matchup for any of the CBs.  However, in that matchup Bryant was well-contained.  This past week…not so much.  That, combined with one of the flukiest plays I’ve ever seen (the opening kickoff debacle), was too much for the team to overcome.  Fortunately, we hit the Over, splitting the action yet again.

Strictly a “take care of business” type of game.  Washington is an absolute train-wreck, and the Eagles need a win to hold onto playoff hope.  Washington has 11 losses this year, and 8 of them have come by 10+ points.  The Eagles should be quite motivated after a tough 2 week stretch, and there’s a lot of potential for recency bias here (against the Eagles).

The Eagles are #1 in STs, Washington is last.

Not much to parse here.  The Eagles are still a good team, they’re just clearly a step below true “contender” status.  Washington, meanwhile, is absolute garbage.  By Weighted DVOA, they’re the worst team in the league.

Turns out ESPN has this section in its Insider PickCenter.  So let’s use their chart: 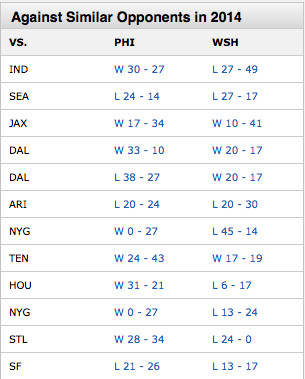 One Dallas result, Jacksonville, and SF favor Washington slightly.  The rest favor the Eagles, most by a significant margin.  The Eagles obviously have a head-to-head win as well.  However, that was all the way back in week 3, and with how much each team has changed that result doesn’t offer much value to us.

Washington’s defense ranks just worse than Dallas and just better than Tennessee.  The Eagles scored 33 on the road against Dallas, 27 at home, and 43 against Tennessee at home.  Even with Sanchez’s struggles, the Eagles should have no trouble topping 30 points tomorrow.  For what it’s worth, in the first meeting this year, the Eagles scored 37 points.

The Eagles offense ranks 16th, which puts it slightly ahead of San Francisco and Houston, as well as the Giants (by a little bit larger margin).  Against those teams, Washington allowed 17 (road), 17 (road), 45 (home), and 24 (road) points.  Note that 3 of those games took place in the first 4 weeks of the season (Phi, NYG 45, and Houston).  The San Francisco game (17 points) is by far the most recent.

The Eagles are averaging 29.7 ppg, Washington is allowing an average of 26.4 ppg.  The Eagles have topped 30 points in 8 of 14 games this season, and I see little reason to believe they won’t hit that mark again.  Remember the big edge in Special Teams.  I expect the Eagles to have several short-field opportunities tomorrow, leading to a lot of red zone chances.  Even if Sanchez struggles, I see the Eagles getting 28-32 points.  If he’s on his game, this could easily go to 40.  For a projection, I’ll stay on the low side and call it 32 points, just above the Eagles average.

Washington’s offense is also bad.  The closest comps on the Eagles schedule are Arizona and St. Louis, both of which are slightly better than Washington.  Against those teams, the Eagles allowed 24 (road) and 28 (home) points.

The Eagles defense ranks 8th, just below St. Louis.  Against them, Washington scored 0 points.  That game took place just 2 weeks ago.  In fact, over the past 5 games (since the bye week), Washington is averaging just 12 points per game.

On the season, the Eagles are allowing 24.8 ppg, and Washington is scoring 18.4.  However, as I mentioned above, Washington’s recent performance has been dreadful.  Robert Griffin is back and playing OK, but he’s also taking sacks at a rate of 15.7%.  That makes it really hard to sustain drives.  Given the Eagles’ pass rush, I don’t see many long Washington drives.  DeSean might get free for a big play or two, but outside of that I can’t see where the offense will come from.  2 DeSean bombs and a TO-aided TD still gets you to just 21 points.

I think Washington scores less, but for the sake of the spread, I’ll stick with 21 for Washington. The spread is 8, and I’m looking at a projection of Eagles 31, Washington 21.  As bad as everyone feels after last week, I’d take the Eagles. I have stayed away from teaser recs this year, but this looks like a great option for that type of play.  The 8 point line is big for a road team, especially one starting Mark Sanchez, but Washington really is terrible.  Tease the line down to a TD or better and throw them in a teaser.

On the Over/Under, we’ve got a little difficulty.  The line is 50.5, and I think the Eagles might get close to that on their own.  However, we might see a replay of the Giants game.   No matter how good the offense is, if the other team doesn’t score it’s really hard to hit the over.  My projection says 52 points, so that points to the Over.  However, I think there’s some serious downside risk in the Washington score projection, so wager accordingly.