Fletcher Cox is having a truly dominant season. But you wouldn’t know that if you just looked at the box score.

The primary reason behind the Eagles 2-0 run was not Sam Bradford, although he played well in both games. It was not the special teams or defensive touchdowns, even though they came up huge against the Patriots. And it was not Kelly’s decision to cut Miles Austin or demote DeMarco Murray, although that certainly did help.

It was Fletcher Cox.

Often overlooked, at least by the national media, Cox has turned in two of the more dominant performances of his career. The Patriots and Bills offensive line tried everything: double teams, chip blocking, heck, even triple teams. It didn’t matter. Cox was a human wrecking ball hell-bent on disrupting the flow of two very good offenses.

It’s why you saw these superlatives all over the internet following the win over the Buffalo Bills:

“Fletcher Cox, he ate my lunch today,” Richie Incognito, who attempted (miserably) to block Cox most of the game.

“That 91 [Fletcher Cox] is a good player. I was laughing when I saw him being compared to Jerome Brown, but I’m not laughing now. The kid is a pretty good player.” Rex Ryan, whose father, Buddy, drafted and coached Jerome Brown in Philadelphia.

“In all my years I’ve only seen one defensive tackle [be a dominant run stopper and pass rusher], and that is Jerome Brown and you’re seeing a lot of those qualities in Fletcher Cox. When he doesn’t want to be blocked, you cannot block him. The guy’s incredible.” Seth Joyner, All-Time Eagles great and teammate of Jerome Brown.

These are just a sample; I could fill an entire post with analysts and other players signing Cox’s praise. It is recognition that is long overdue. While Cox has stepped his game up a notch over the last two weeks, he has been playing at an extremely high level since 2014. But his play was often overlooked by the national media. The Pro Bowl snub last season was just icing on the cake, a criminal omission that served as a harrowing reminder that Cox had yet to get the love his rightfully deserved.

But, given the defensive system in which he plays, it should not be unexpected.

Held Back by a System

Billy Davis deploys a two gap 3-4 defensive system, one which requires the defensive line to cover two gaps at the same time. This is unlike the more traditional 4-3 defensive system which gives lineman one gap responsibilities and more chances to make plays in the backfield.

Below is a shot of the Eagles defensive line presnap with their gap responsibilities. Bennie Logan (96) is in the 0 technique, lined up directly over the center and is responsible for the A gaps (the spaces between the center and guard). Both defensive ends, Fletcher Cox (91) and Cedric Thornton (72) are playing the 5 technique, and are responsible for the B and C gaps, which are located between the guard and tackle and outside of the guard. 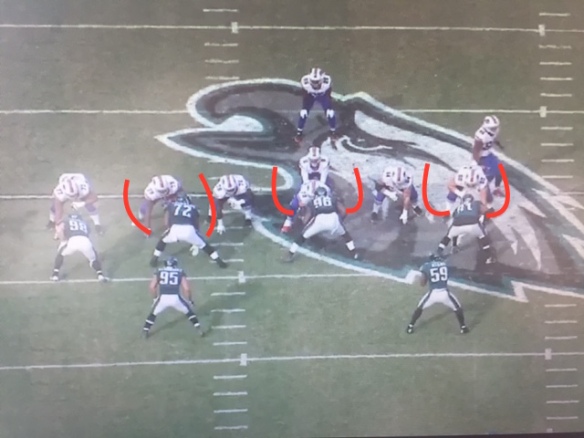 The 3-4 defensive line’s job responsibility is to occupy offensive lineman and read and react to the play. The outside linebackers (Graham and Barwin) play contain on the outside — hence why you here Billy Davis and Chip Kelly routinely tout the importance of finding outside backers that excel in run support.

Taken out of the football vernacular, this system requires Cox to wait instead of attack and to take one for the team so that Kendricks, Ryans and Alonso can make plays.

Box score analysts could look at Cox’s performance against the New England Patriots and come away unimpressed, given his pedestrian 3 tackles, zero sacks, tackles for a loss, forced fumbles, or batted passes.

But if you watched the tape or dug deeper into the numbers, you would see that Cox turned in a dominating performance, as ProFootballFocus.com pointed out:

Fletcher Cox had no sacks vs NE, but the man Belichick praised during the week had 14 total pressures. FOURTEEN!

To casual fans, pressures or hurries are relatively meaningless stats, or worse, they represent a pass rusherer’s failure to do his job since he didn’t get the sack.

That’s why Billy Davis was laughed at by many when he said the Eagles are more concerned with getting pressure and moving a quarterback off its spot than sack totals. Many panned this as a misguided attempt to explain away his team’s middling pass rush.

But Davis is right. While sacks are critically important, getting pressure on the quarterback is a surefire way to throw an offense off its rhythm.

Consider this: the top completion percentage in NFL right now belongs to (wait for it)….. none other than Kirk Cousins, who completes 69.2% of his passes, per PFF.com. (I know, I am just as shocked as you).

But the highest completion percentage in the NFL drops a full 10 percentage points when measured by quarterbacks throwing under pressure; Matt Ryan completes only 59.1% of his passes, per PFF.com. That would rank 27th out of 31 qualifying quarterbacks in normal passing situations.

Or consider this: the range of passing completion percentage in the NFL is 55% to 69.2%.

But when quarterbacks are under pressure? Those numbers dropped to 35% to 59%.

The proof is in the numbers. Getting pressure on a quarterback and moving him off his spot disrupts the flow of an offense and throws a quarterback off his game. So while the box score suggests Cox was a non-factor, the 14 pressures he generated suggest otherwise.

It’s why the Patriots, seemingly having enough of Cox manhandling their offensive line, eventually resorted to triple teaming Cox:

On the Pats' final drive, they'd finally seen enough of Fletcher Cox in the backfield: pic.twitter.com/dVri6NfJLM

Malcolm Jenkins’ pick 6 perfectly encapsulates how Fletcher Cox can have a dramatic impact on a play without showing up in the box score. Because the pressure that Cox got on Tom Brady clearly affected his throw, which led to the interception and touchdown:

Cox rarely gets mentioned when this play is discussed. But he deserves credit. Had Brady not been rushed to get rid of the ball so quickly, he likely could have stepped into his throw or scanned the field for other receivers.

Cox was just as dominant against the Buffalo Bills, routinely abusing their offensive line, and in particular, Richie Incognito.

Most people remember this play because Cox shoved McCoy’s face into the turf. And indeed, that single act was the perfect revenge on McCoy on behalf of the entire Eagles franchise and the fans.

But what is most impressive is how quickly Cox explodes through the line, coming almost unblocked. It is reminiscent of Aaron Donald, the St. Louis Rams’ defensive tackle who is getting calls to be the defensive player of the year.

Here is a better angle:

But the most impressive play of the game came when Cox was able to tackle McCoy after a gain of three yards. Wait — what’s impressive about tacking a running back after gaining three yards? Exactly my point.

Now watch it again and focus on Cox.

As you can see, Cox is double teamed by the left tackle and tight end. He does his job, using one hand to occupy each as the outside zone run works its way towards the sideline. Now watch the lateral quickness of this 6’4, 300 pound man. While double teamed, he is able to beat the much smaller and presumably much faster LeSean McCoy, who is running free, to the sideline.

When it’s time to make a play, he simply manhandles the lineman, tosses the tight end aside like a rag doll, and stops McCoy. All on his own.

As Seth Joyner said, courtesy of CSNPhilly.com’s Reuben Frank: “I ran [that play] back like 10 times [when watching the film]. I’m like that is unheard of. That’s the kind of stuff Reggie White did. Jerome was good but he didn’t do that kind of stuff. To dominate two guys?”

Cox isn’t just brute strength or quickness. He has an impressive array of pass rushing moves that help him to make plays in the backfield. One of his favorites — which we saw on that Malcolm Jenkins pick-6 — is the club move.

It’s like a crossover in basketball, but with violence.

Cox executed a variation of this move (where he got Incognito going inside only to explode outside) to perfection against Incognito:

Watch how Cox engages with his inside (left) arm to get Incognito going in one direction, then with one quick, violent swing with his outside arm, push Incognito to the side. He uses Incognito’s momentum against him, getting an easy opportunity for a sack. Tyrod Taylor never stood a chance, as the 6’4, 300 lb defensive end uses his 4.79 40 speed to take him down with ease.

The Bills had used tight end Chris Gragg to help double Fletcher Cox on Sunday for a good portion of the game. It was an approach the Bills used against J.J. Watt to great success the previous week, which indicates just how highly the Bills view Cox as a playmaker.

But for some reason, the Bills called a run play which left poor Gragg on an island one-on-one with Cox. The result was as unsurprising as it was enjoyable to watch:

And therein lies the problem that Cox presents to offensive coordinators. It’s a catch-22 for an offensive coordinator: do we use two guys on one, thus putting us at a numbers disadvantage? Or do we try to single up and hope we can somehow limit his effectiveness? At this point in his career, it’s almost like it doesn’t matter.

The All Pro Case

That Fletcher Cox should be voted to his first Pro Bowl is a no brainer. As a 3-4 defensive end, Fletcher Cox is the third highest rated 3-4 defensive end according to ProFootballFocus.com, but is only .4 points behind Mike Daniels of the Green Bay Packers. That ranking should change soon, as Cox is simply a much better playmaker than Daniels, as evidenced by Cox’s 62 pressures (sacks, quarterback hits and hurries) compared to Daniels’ 45.

Indeed, Cox leads all 3-4 defensive ends with 45 quarterback hurries. The next closest player is Muhammad Wilkerson with 38. Daniels is a distant third with 33.

Again, all of this is being accomplished in a 3-4, two gap defensive system that is literally designed to limit a defensive end’s opportunities to make plays.

While I think this is the year that Cox finally gets the Pro Bowl recognition that he deserves, a case can be made that he should be an All-Pro. Outside of J.J. Watt and Aaron Donald, I cannot think of a single defensive lineman causing more havoc on a routine basis than Fletcher Cox. He is playing at such a high level that he deserves to get the All-Pro nod.

But while the All Pro voting system removes the fan vote (and thus, popularity contest) from the equation, Cox is still facing significant hurdles to get the recognition he deserves. As a defensive end, Cox competes against 4-3 defensive ends that are in prime position to make more plays. While those voting on the All Pro awards certainly understand that stats aren’t everything, there is an inherent bias towards high sack numbers regardless.

So the All-Pro nod likely won’t happen this year. But eventually, Cox deserves it. Because he is one of the best defensive lineman in all of football, even if the box score suggests otherwise.