Note: This article was broken down into two pieces because all of the gifs made the size too large. This is Part II. You can read Part I here.

Of course, ask any Eagles fan over the age of 15 about the wide nine and they will look at you in horror. The 2011-12 defenses, where Jim Washburn forced the wide nine down Juan Castillo’s throat, was nothing short of an unmitigated disaster. Schwartz is a much better defensive coordinator than Castillo, but that doesn’t mean his scheme is perfect, either.

You might have noticed that I have primarily relied on three defenses in Schwartz’s time as a defensive coordinator: the 2007-08 Titans and the 2014 Bills. That was by design; the rest of his statistics are mediocre, at best.

I compiled data for key defensive statistical categories, courtesy of Pro-Football-Reference.com, FootballOutsiders.com and NFL.com.  At his absolute best, Schwartz is a top flight defensive coordinator whose defense gets sacks and creates turnovers in hoards. But in the 14 years as a defensive coordinator or head coach, Schwartz’s defenses have ranked in the top 10 of FootballOutsiders’s DVOA ranking just four times, while they ranked in the bottom third of DVOA ratings six times. During his entire tenure, his defensive units ranked 17th, middle of the pack.

A couple of caveats worth pointing out. Each of those bottom third defenses came on teams that were rebuilding (the Titans after the 1999 Super Bowl run, and Detroit after it’s 0-16 campaign in 2008). What’s more, Schwartz was not the defensive coordinator in Detroit, even if they did run his defense.

So it’s not entirely fair to blame Schwartz for how bad these units played. Coordinators, especially, are only as good as the talent at their disposal; and if a scheme could completely overcome talent shortfalls, everyone would use it. But we shouldn’t white wash his resume either. Those teams are evidence that we can’t just assume Schwartz will turn the Eagles into a top 10 defense this year. It could just as easily end up worse.

One area of concern that is not reflected in the above numbers, but showed up on the tape, is the run defense. The wide nine was created by Schwartz to help stop the Colts stretch run by forcing everything back to the middle of the defense.

But as  Chris Brown discussed back when the Eagles ran the wide nine, spreading the defensive line to its extremes creates secondary issues: “…this technique (it’s a technique if anything, there is no such thing as the “wide nine defense”), obviously opens up all kinds of issues in the run game: the defensive end aligns so wide the interior offensive linemen can quickly get up to the second level defenders like the linebackers, and the defensive ends are easy marks for traps, draws and counter plays as they sprint upfield.”

Just read this reaction from Mychal Kendricks after Jim Washburn was fired in 2012, ending the wide nine experiment, courtesy from Birds 24/7 :

“Mychal Kendricks was asked how the change up front from Jim Washburn’s Wide-9 to Tommy Brasher’s more traditional scheme impacted what he was doing on Sunday.

The rookie linebacker paused a beat, gave a quick laugh, then turned to Jamar Chaney and said, “Should I answer that?”

Here’s an example of what they are talking about. The Buffalo Bills have their defensive ends in the wide nine technique against the Detroit Lions. The Lions, however, come out showing a power run formation with seven players lined up in a blocking stance. 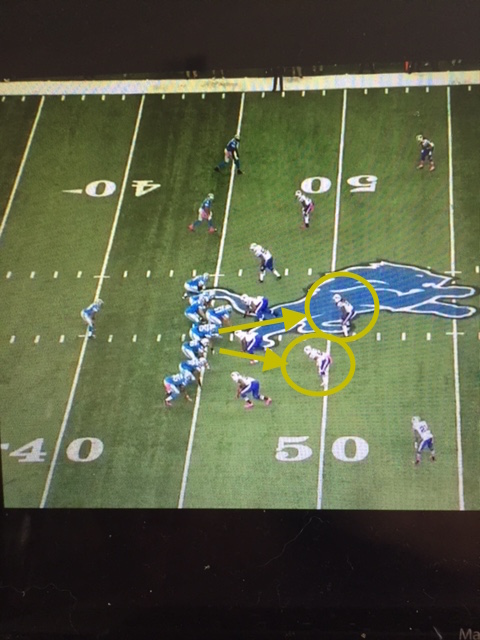 Because the defensive line is spread out so far, the interior offensive linemen get a clean break to the second level, where they are able to  put a hat on the linebackers and spring running back George Winn for a huge gain. 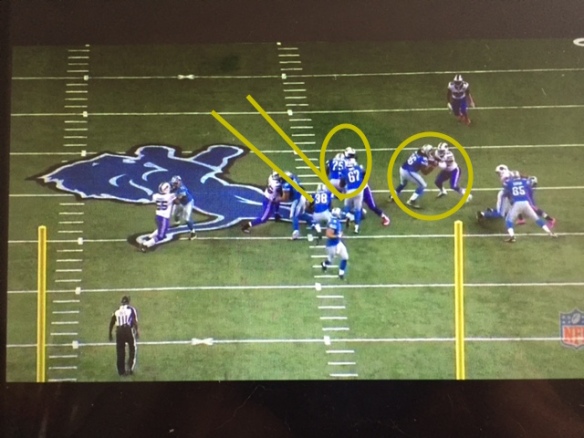 Here’s a vine of that play

In order for the Eagles run defense to be successful, two things must occur: Fletcher Cox and Bennie Logan will need to recognize run plays early so they don’t leave their linebackers in a bind on obvious run downs. Second, it is imperative that the Eagles linebackers are able to shed blocks to make a play in the run game. Kendricks has reportedly added 15 lbs of muscle this off-season for that very reason.

Can The Eagles Personnel Succeed?

We finally made it to the payoff. What type of players have made Schwartz’s defense succeed or fail in the past, and do the Eagles have players to make sure the former occurs? Assuming they can stay healthy at key positions, the answer looks promising.

The one constant connecting Schwartz’s best defenses is a dominant defensive line. Go back to that chart and compare Schwartz’s best defenses to his worst; the clearest indicator of success is their rank in sacks. If his team struggled to sack the quarterback, they likely struggled elsewhere. If sacks were up, everything else likely fell into place.

The 2007 and 2008 Titans teams were led by the Albert Haynesworth, Kyle Vanden Bosch and an aging, but still effective, Jevon Kearse. Haynesworth was arguably the best defensive player in the NFL in 2007 and 2008, making the 1st Team All Pro while spearheading the Titans dominant pass rush. Vanden Bosch got 12 sacks in 2007 and was rewarded with a Pro Bowl birth. The 2008 team lacked a single dominant pass rusher, but got 37 sacks from a combination of multiple players up front.

The 2014 Buffalo Bills provided Schwartz with arguably the most talented defensive line he has had to date: with Marcell Dareus, Mario Williams, Kyle Williams and Jerry Hughes. Dareus and Williams were first team All-Pros, Williams was named to a Pro Bowl, and Hughes parlayed his 10 sack performance into a $45 million contract extension.

It’s easy to see the similarities between those dominant units and the Eagles current personnel. Fletcher Cox is every bit as talented as Albert Haynesworth and Marcell Dareus. Haynesworth had 14.5 sacks from 07-08, while Dareus had 10 in Schwartz’s lone season in Buffalo.

Fletcher Cox got 9.5 sacks last year in a system that was designed to limit his opportunities to make plays. In the rare instances in which Cox was allowed to attack downhill last year, he was practically unguardable:

I think Bennie Logan, Vinny Curry and Brandon Graham should excel too. Logan will benefit from Cox getting routinely double teamed. That, plus the added space he will get from the ends split out wide, should give him ample opportunities to get after the quarterback. I expect a strong season out of Logan this year. This system seems to fit his strengths and will give him more opportunities to accumulate the stats needed to be recognized:

I, along with practically everyone else, expect Curry to shine as well. Curry played only 35% of the defensive snaps last year for the Eagles, another (of many) indictments on Billy Davis’ incompetence as a defensive coordinator. But in his limited opportunities, he was extremely productive. According to PFF.com, Curry finished second among 3-4 defensive ends in generating pressure on the quarterback in 2015, behind only JJ Watt. In 2014, Curry finished fifth, and finished second in 2013.

This scheme should accentuate his strengths as a pass rusher, limiting the amount of thinking he needs to do, and unleashing his freakish burst and athleticism on the quarterback.

And I haven’t even touched on Brandon Graham or Connor Barwin, who both figure to be productive in getting after the quarterback. Like the other units, the defensive line lacks depth. But if it’s top starters can produce as expected, this unit should carry the Eagles defense, and could rival the great defensive lines that Schwartz has had in the past.

And while I am not enamored with our cornerbacks, I think this scheme should help mitigate their lack of elite talent. Assuming the Eagles can get pressure on the quarterback, the corners will have more freedom to try to make plays.

If I had to identify the one achilles heel for the Eagles defense, it is the linebacking corp. I’d feel much more confident in the unit if Jordan Hicks was guaranteed to be healthy all year. But that seems like a tall order for a player that has missed significant time due to injury in three of his last four seasons. Outside of that, can Kendricks play effectively carrying 15 extra lbs of muscle? And what will Nigel Brandham provide, assuming he isn’t handed out a lengthy suspension by the league after his reported assault on a cabana boy?

In Schwartz’s defense,  the linebackers are the linchpin for the Eagles run defense. Look no further than that 2011 Eagles unit; their top three tacklers at the linebacking position were Jamar Chaney, Brian Rolle, and Akeem Jordan according to Pro-Football-Reference.com. Kendricks, Hicks and Bradham are certainly more talented than that awful trio, but what happens if Kendricks and Hicks get hurt?

If they can stay heathy and exceed expectations, I would not at all be surprised if this is a top 10 unit. But if Hicks goes down, or Kendricks fails to improve, or if their depth is tested? We could be in for a long season on the defensive side of the ball.

2 thoughts on “Jim Schwartz, A Profile in Aggression, Part II”