The Eagles just finished the preseason 4-0, and somewhat predictably, the glowing reviews are flowing in:

Bradford doubters having a hard time explaining last night. That's really how he played the 2nd half of last season

In that division, it is awfully enticing to think, if a couple things go right, we have a chance at the playoffs – @SeniorBowlPhil on Eagles

Now, I don’t want to be a Debbie Downer here, but it should be fairly obvious by now that preseason results are relatively meaningless. My favorite illustration of this comes courtesy of the 2008 Detroit Lions, who went 4-0 in the preseason but 0-16 during the regular season.  Or consider this study from the NY Times, which found that the last 18 teams that finished undefeated during the preseason went a combined 130-158 during the regular season. And of course, look no further than last year’s Eagles team, which looked unstoppable during the preseason but ended up coming woefully short when it mattered most.

It’s hard to watch preseason and not get excited when your team plays well. The game has every symptom of a regular football game, but with backups in key spots and teams not game planning for their opponents, we should take everything that we see with a grain of salt. With that said, here are five take-aways from the preseason after re-watching all of the Eagles games again.

This isn’t a shocker.

The Eagles defensive line has a chance to be special. How special likely depends on the health of Fletcher Cox and Bennie Logan. If they play up to their considerable talents, this unit is going to terrorize quarterbacks all season long and could spearhead a top five defense.

Fletcher Cox is the anchor of the line and possess an otherworldly combination of size, strength, and athleticism. His hit on Andrew Luck nearly broke the internet last week, but I was more impressed with his ability to line up at defensive end and get to the quarterback. There aren’t more than three men his size in the world with that type of ability.

I still believe that Cox and Logan are going to take their games to the next level this season. This defense is going to allow them to pin their ears back and get after the quarterback, something they were prevented from doing under Billy Davis. And nothing I have seen so far has moved me off that thought process. If anything, it has just confirmed it.

But I have been just as impressed with the Eagles pass rushers. Brandon Graham, Vinny Curry and Connor Barwin look like naturals as 4-3 defensive ends, an impressive transition given that they have spent the last three years in a 3-4 defense. For the first time in a long time, the Eagles have multiple pass rushing threats. That type of depth is a rarity in today’s NFL.

I’ve also been impressed with the run defense. Lining up in the wide nine puts tremendous pressure on your linebackers, since they no longer have defensive lineman occupying the interior offensive line. That free release allows lineman to get up to the second level, leaving the defense vulnerable against the run.

So far, the Eagles have done an effective job limiting the run game. They have been funneling running backs back to Logan and Cox, the strength of this run defense. And the rest of the defense has been relentless in their pursuit of the football.

I am anxious to see if this run defense holds up once teams start game planning for the Eagles. We should expect to see a steady diet of draws, screens, counters, and other plays designed to take advantage of the running lanes up the middle. If the Eagles can adjust, this is a top 5 defense. If they can’t? Welp.

2.  Doug Pederson’s Offense won’t be Explosive, but it will be Creative, Effective and Efficient

I touched on this during my breakdown of the tight ends and running backs, but I think it deserves more attention. Andy Reid had many faults as a head coach, but knowing how to draw up plays to attack a defense was not one of them. And it seems like Pederson is cut from the same cloth.

I expect to see a lot of subtle play designs that maximize the Eagles talents while minimizing their weaknesses. Here are some quick thoughts on what we should see on a consistent basis:

In other words, expect this offense to mirror what we saw from Andy Reid in Kansas City and during his early years with the Eagles. It won’t be flashy, it won’t be sexy, but it will be effective and efficient.

I don’t have the energy for another season debating Sam Bradford. I did a fairly comprehensive breakdown of his game in the offseason, and feel confident in that assessment.

At this point in his career, it is unreasonable to expect Bradford to be anything other than what he has been: a mediocre starting quarterback — i.e., in the 15-20 range. Per Pro-football-reference.com, here is how Bradford stacks up with his contemporaries from a value added perspective:

Now, Bradford showed signs down the stretch last year. Could he finally turn it around and validate the potential that caused him to be the top overall pick in the 2010 NFL draft? Sure. It could happen. But is it likely? I don’t think so.

The good news is that Bradford doesn’t need to be a top flight quarterback for this team to compete in the woeful NFC East. The Kansas City Chiefs have gone 30-16 with Alex Smith as quarterback, and here are his per game averages, per Pro-Football-Reference.com:

218 yards and 1 touchdown per game with 7 yards per attempt? That’s a Sam Bradford stat line if I’ve ever seen one.  Yet the Chiefs have made the playoffs in two of three seasons under Smith, winning 11 games in both seasons. The Chiefs accomplished that because of their strong defense and efficient offense. I don’t expect the Eagles to win 11 games, but I do expect the Eagles to have a strong defense and efficient offense. So who knows? Maybe we surprise some people this year.

4. Dorial Green-Beckham could be a good weapon for the Eagles

The Green-Beckham trade was a classic low risk, high reward move. And if the preseason play is any indication, the Eagles gamble might have paid off.

At 6’5, 237 lbs, DGB is every bit the red zone weapon, especially with the fade route. He is very good at high pointing the ball, using his size, athleticism and body control to his advantage.

Last year with the Titans, DGB was a low volume, high production wide receiver. His yards, average yards per catch, touchdowns, and catches of 20+ yards all ranked in the top 5 for rookie wide receivers.

But he has flashed the ability to be more than just a deep threat or redzone target. I was impressed by Green-Beckham’s ability on underneath routes last night against the Jets. He used great technique to beat press man coverage early on in the game:

The biggest knock on DGB out of Tennessee was his lack of consistency. There were rumors that he showed up to training camp out of shape and that he didn’t put in extra work to be great. Those bad habits might have been reflected in his catch rate last season, which was one of the worst rates among rookies: 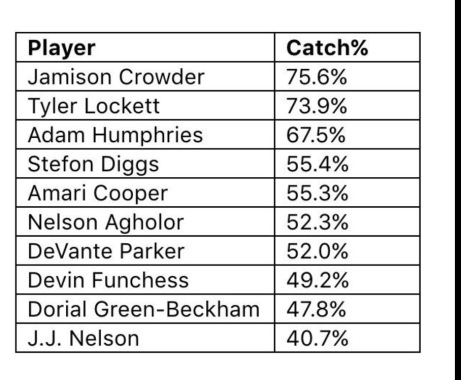 It’s too early to call the DGB trade a success. He was traded for a reason. But it’s not hard to envision a scenario in which DGB is an effective weapon for this team, especially in the redzone. Anything beyond that, especially given the opportunity cost to acquire him, is gravy.

5. Yes, the Eagles can compete for the division

I don’t like to make predictions, but after studying the film I think the Eagles can finish this season anywhere between 7-9 and 9-7. Where they fall along that scale will likely depend on how healthy they are this year.

This team is not without flaws. The offensive line could be a mess. The corners aren’t going to lock anyone down. And the linebacking corp is one injury away from having serious issues. But as I’ve explained before, I think the Eagles scheme on both sides of the ball can limit some of these concerns.

If the Eagles were in a more competitive division like the NFC West, I’d expect them to do much worse. But the Cowboys don’t have Tony Romo for 6-10 weeks and I have no idea how they are going to get pressure on the quarterback. The Giants spent big in the offseason, but that rarely has proven to be an effective way to build a playoff contender. And while I like the roster that the Redskins have built, they are still depending on Kirk Cousins. You’ll have to excuse me for expecting him to regress this season.

The Eagles early season schedule also sets up nicely. They have the Browns at home — and let’s be honest, they are mailing it in this year — and get the Steelers without Le’Veon Bell, the Vikings without Teddy Bridgewater, and the Cowboys without Tony Romo. If they can build up some momentum, it could offset their brutal three week schedule starting Week 11: at Seattle, home against Green Bay, and at Cincinnati. Yikes.

I don’t expect the Eagles to break the 10 win barrier, but I do think they are good enough to hang around in what will likely be a weak NFC East.