A few quick notes/thoughts before this afternoon’s game: 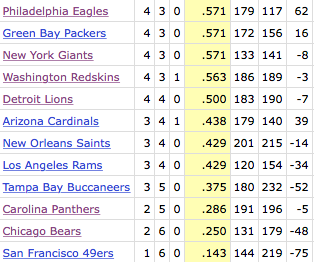 A win over the Giants, in New York, would keep the Eagles in the lead, and put distance between them and the Giants, one of two teams currently tied for the wild card lead.

Outside of ODB, there isn’t a single guy on that offense to be worried about.  With the Eagles defense playing as well as it is, it’ll be very difficult for the Giants to score points without a TO or STs touchdown. Meanwhile, the Eagles are a better team than their record suggests, and have played very well in 6 of their 7 games so far. They seemed on the verge of blowing out the Cowboys before Smallwood’s fumble last week and some late-game choking from Pederson.  Those things will happen again, but not this week.  The Eagles finally put a full game together and roll the Giants.  28-13.