I’m working on a longer analysis that’ll look at individual player fumble percentages.   In the meantime, I thought I’d provide some color on the Eagles terrible turnover statistics this season.

For those who are unaware, the Eagles rank last in the league in turnover differential at -22.  Of their 34 total turnovers, 21 have been fumbles.  As you can imagine, consistently forfeiting possession diminishes the chances for success.

There is reason to hope, however, that next year will see improvement.  The numbers above are mostly a function of the rate of Eagles fumbles and their inability to recover them.  Below is a chart illustrating the Eagles fumble recovery percentage (includes both Eagles fumbles and opponents fumbles): 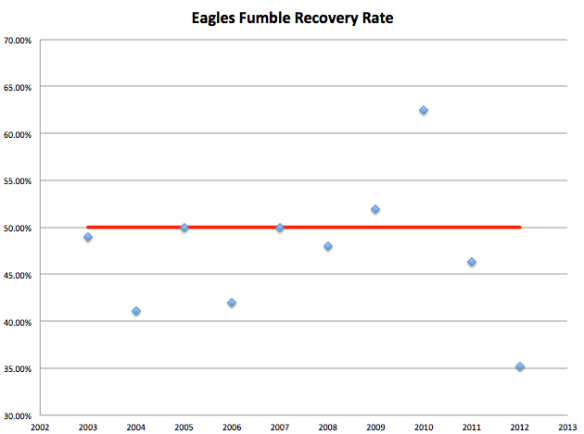 In general, we would expect fumble recovery rates for individual teams over the long-term to hover around 50% (given the play’s binary nature).  Indeed, if we take the average of the series above we get a value of around 47%.

In the next week or so, I plan to take a look at the correlation of team fumbles from one year to the next (as I’m currently doing for individuals), but at the very least, we can assume that the Eagles are likely to improve on their recovery rate next year (if for no better reason than its difficult to be worse).  Holding all other things equal, that alone will result in an improvement in the turnover differential, raising the odds of success.