With the current emphasis on the passing game in the NFL, the adage “throw to score TDs, run to kick field goals” has become popular with commentators. 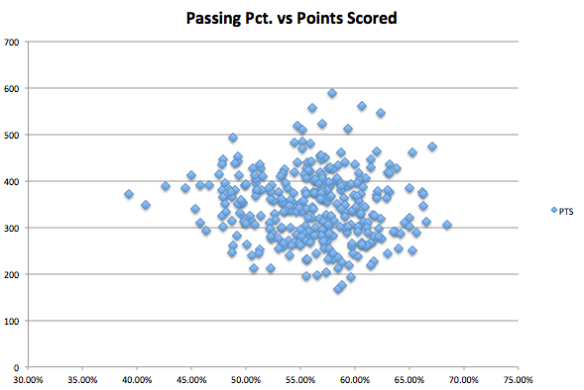 If you said no, you’d be correct.  The correlation value for the above data series is -.083, which means there is really no relationship.  Passing the ball more often does not appear to lead to more points scored.

Some of you (if not everyone) are probably thinking:  “Wait, teams change their play-calling when the are winning/losing, skewing the run/pass ratio.”  My answer: Of course they do, but that itself should not skew the above data to such a degree that there is NO relationship between passing percentage and points scored (if passing really did lead to more points scored.)  Teams that noticeably change their strategy can only do-so late in the game, limiting the number of plays they can run that will skew their overall averages.  Additionally, teams that are running the ball to kill the clock take as much time as possible, running as few plays as possible, again limiting the skew.  Overall, of all the plays run in the NFL every year, relatively few of them are run by teams focused on anything except scoring points.

Feel free to disagree, but if passing the ball more really did lead to more points scored (i.e. TDs instead of field goals), I’d expect to see at least a weak-moderate positive relationship despite any skew effects of teams killing the clock.

Conversely, we can also ask: “Do teams pass more when they are losing?” While the data can’t tell us definitively which is cause and which is effect (do losing teams throw more or does throwing lead to more points against?), it can show us if there is a relationship between the two. Here is the chart, this time with Points Allowed on the Y axis: 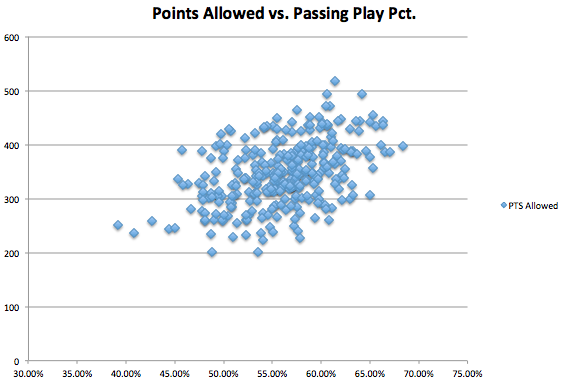 Let me note again that the data doesn’t prove “Losing teams throw more often”, but it does lend pretty strong support to that hypothesis.  However, given the data above, perhaps losing teams should consider running the ball more, since passing it doesn’t appear to give them a greater chance of catching up (scoring points.)

Obviously this doesn’t hold for end of game scenarios where the clock becomes a big factor (passing takes less time then running.)  However, it does suggest that teams that fall behind early shouldn’t alter their game plan until it is absolutely necessary (very late in the game), something Andy Reid repeatedly did over his career with the Eagles.

2 thoughts on ““Pass to score TDs, run to kick field goals”…or not”