Two notes before we get to it:

1) There was almost nothing positive to take from that game.  On review, it was as bad as it seemed live (maybe even worse since the lack of effort was abundantly clear when each player was viewed individually.)

2) There weren’t many players of interest for the team’s future due to injuries.

In light of that, here are the Rewind thoughts, followed by some pictures:

– Anyone who watched Vick on Sunday should have a newfound appreciation for Nick Foles.  There are few things as annoying for a football fan than to watch the QB repeatedly miss open receivers.  The super-athletic “mobile” QB’s can have their speed, I’ll take accuracy over running any day.

– LeSean McCoy is crazy good.  The lone bright spot this week, McCoy might have single-handedly made the Eagles head coaching job the most attractive available.  I have mixed feelings on Chip Kelly, but there’s no doubt that he must be salivating at the prospect of having McCoy/Brown as his backfield.

As far as turnaround plans go, the Eagles is fairly simple:  Let McCoy carry the offense behind a healthy line while you fix the defense and get a longer look at Foles.

– I mentioned that Graham would be a focus while reviewing the tape, so…he played an OK game.  Wasn’t nearly as disruptive as he has been over the past few weeks, but the Giants are among the toughest match-ups in the league for pass rushers.  Graham made a few nice plays and repeatedly drove his blocker backwards, but couldn’t get off the block to finish the job.  However, given the fact that everyone else on the defense either mailed it in or didn’t have the talent to be on the field in the first place, it’s probably not a game to draw anything significant from.

– The LBs for the Eagles had an absolutely embarrassing performance.  I’d prefer not to mention their names in the hope that they will just disappear from both the roster and my memory.  Demeco and Mychael can come back, everyone else needs to go.   Complete lack of ability.

Hand-off to nobody – One of the most frustrating aspects of the Vick era can be seen below.  Most readers here will recognize it, since we’ve seen it much more often than anyone should.  Vick either fakes the hand-off with nobody in the backfield, or does it to the side opposite the runner. 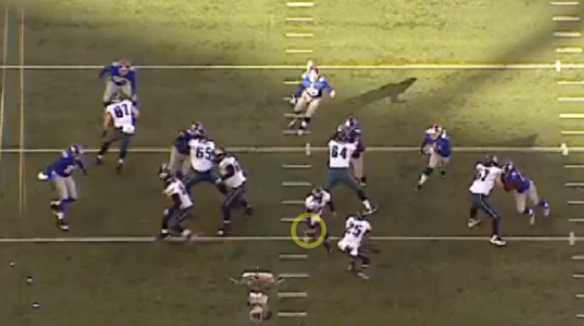 Running PA when you’re not a running team is problematic enough, but doing it without even having a RB to fake-accept the hand-off is downright obnoxious.  Normally I’d chalk this up to a miscommunication, but it’s happened often enough that simple miscommunication seems unlikely.  Additionally, though I haven’t gone back and checked, I don’t recall seeing this from Foles, which indicates it’s not by design.  Needless to say, I’m stumped.  Regardless, with Vick gone, let’s hope we never see it again.

Dear Colt, thanks for playing, better luck next career.

Though there were lots of plays that highlighted the myriad defensive holes of the Eagles, this one is particularly galling because of the situation.  The team is already losing 28-7.  There are just 10 seconds left in the half and the Giants are already in field goal range.  That means this is a pretty straightforward play for the defense:  KEEP THEM OUT OF THE END ZONE.  The Giants have 3 TOs, but with only 10 seconds remaining, they likely only have two plays left, this one and a field goal attempt.

The Eagles recognize the situation and line up accordingly in a quarters-zone prevent defense.  That means the two safeties and outside corners essentially split the field into four slices, with each of them responsible for one.   Meanwhile, the two LBs and Boykin (slot corner) each have an underneath zone.  The goal of the play is not necessarily to prevent a completion, it’s simply to force the Giants to complete a ball in bounds and tackle them in play, eliminating a TD as a possibility and forcing a field goal.  The DTs run a twist, but it doesn’t produce much pressure. 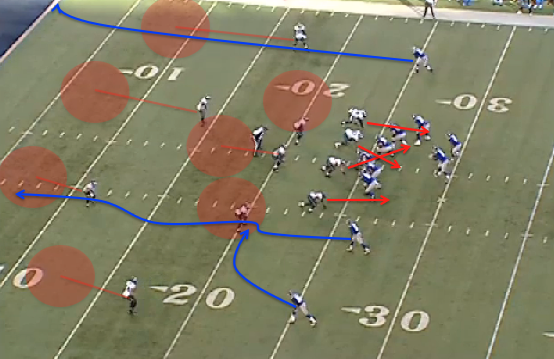 With the above picture and situation in mind, lets jump to later in the play: 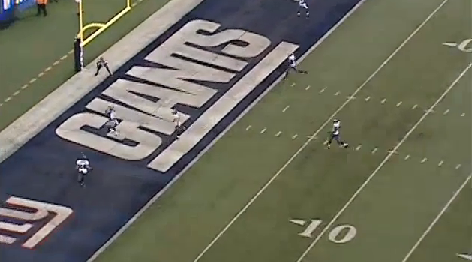 This is the moment of the catch and the only correct response is either What?!? or various profanities strung together.  To recap, the Eagles’ only goal on this play was to prevent a receiver from getting behind them for a TD.  Not only does that happen, but Colt Anderson manages to wind up nearly 5 yards under his man at the catch!

So how did it happen?  Colt Anderson had a brain-cramp.

If you look back at the initial diagram, Cruz runs a seem, but stutter-steps twice.  His second stutter-step occurs just in front of Colt and causes Anderson to freeze.  The only thing Anderson CAN NOT do in this situation is stop moving and let Cruz behind him, so of course that’s exactly what he does.  Here is Colt’s freeze:

An absolute disaster of a play for Colt and the Eagles, though it obviously wouldn’t have changed the outcome.  Even if Anderson gets thrown by the stutter-step, he absolutely MUST maintain his momentum moving backwards.  That way, even if he guesses wrong on which direction Cruz is going, he has a chance to recover.  Instead, he stands still, while Cruz is still near full-speed.  The chances of Colt catching Cruz after giving him a head start?  Absolutely none.  We knew Anderson didn’t have the speed to run with fast receivers, but we’ve also learned that he doesn’t know how to compensate for it.

This play is from earlier in the game, when the outcome was still technically in doubt.  The Giants are up 14-0 with 3:26 left to go in the 1st quarter.  3rd down with 4 yards to go.   The result of the play is a 41 yard completion to Bradshaw out of the backfield.  Here is the pre-snap setup: 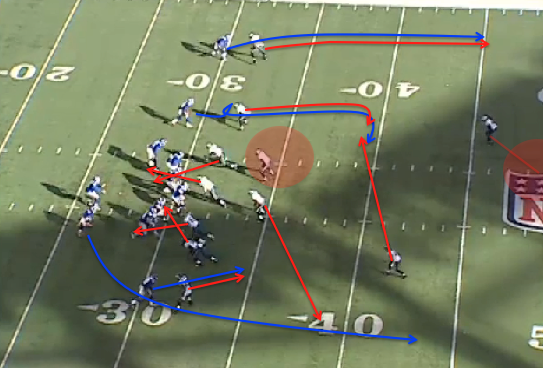 Nothing too crazy going on, though there is one big note to make.  See Colt Anderson’s assignment (safety to the bottom of the screen)?  Immediately after the snap, Colt moves to double-team the slot receiver.  Not sure exactly what Todd Bowles saw to make him call this up, but regardless, it results in a huge hole that the Giants end up exploiting.  UPDATE: To clarify: this looks a bit like robber coverage with Colt playing an underneath zone.  However, at the snap Anderson moves full speed at the slot WR with no regard to his route.  Therefore, it seems more like a double-team than a zone read that Anderson saw and reacted to.

Below is the key moment of the play.  Say what you want about Eli Manning, but the guy is very good at manipulating defenses, especially with the pump-fake.  Here, he uses it perfectly to shift Demeco Ryan’s coverage angle, resulting in the separation he needs to get the ball over top to Bradshaw.  I’ve highlighted Demeco’s angle as he falls for the pump-fake and attacks where he thinks the ball is going.  Also highlighted is Colt Anderson and the space he vacated, resulting in a huge window for Manning to deliver the ball. 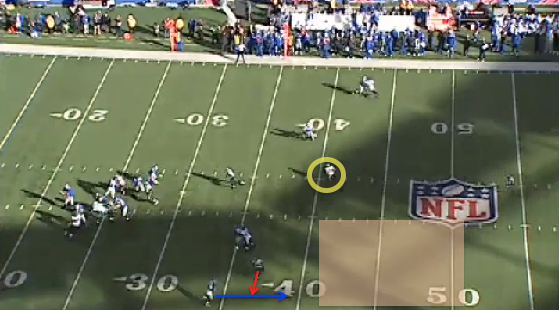 And finally, below, we see Bradshaw as he gets behind Ryans. 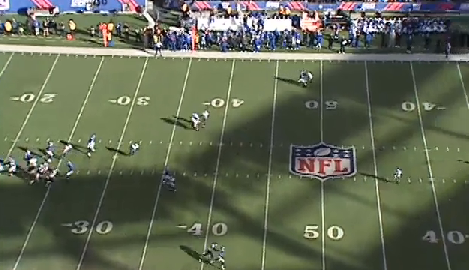 The Wheel Route is one the Giants have used with great effect against the Eagles over the past few years.  The key is that it forces a LB into coverage, where they are typically uncomfortable, and then increases the pressure on said LB through the pump-fake.  The fakes are hard enough for CBs to resist, but even more difficult for LBs purely because they aren’t in coverage as often.  Normally, the safety would provide deep help and ideally break up the play, but Colt left for the double-team, resulting in a very tough matchup for Demeco and 41 yards for the Giants. This particular play is not an indictment of Colt.  It appeared as though the double-team was 100% by design.

Also of note: Kurt Coleman (the deep safety) misses a tackle on Bradshaw after the reception and DRC makes the tackle after chasing the play from more than 15 yards back.

End of the Rewinds

That’s the end of the Eagles Game Rewinds for this year.  However, I’ll probably diagram a few big plays from the playoff games.

Meanwhile, we’ll shift to a roster evaluation and see what the weaknesses are heading into the offseason before an in-depth dive into draft history to see how much is luck vs. skill.