Let’s take a break from the draft research and play a quick game.  See if you can identify the following three quarterbacks. 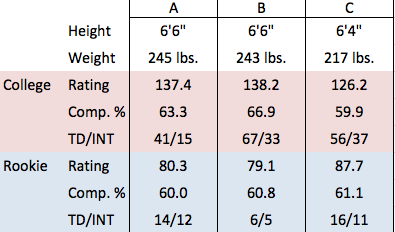 Better yet, with no additional information, which one would you choose?

Any answer is right, because there is almost nothing there to differentiate the three players.   So who are they?

Most serious Eagles fans will know that Player B is Nick Foles.  His 6/5 td-int ratio is a giveaway.

The other two players will both be leading their teams this weekend in the NFC/AFC title games.  Player A is Joe Flacco, player C is Matt Ryan.

Anyone out there who doesn’t want Nick Foles to start next year?  Otherwise, feel free to join me on the bandwagon.  Still plenty of room.