After putting yesterday’s post together and getting a helpful twitter suggestion, I decided to take a look at how Foles stacked up against a larger sample of rookie quarterbacks.

I pulled together the rookie stats for every quarterback drafted in the first round since 1999.  Including Nick Foles (I realize he wasn’t a first round pick), that gave me 38 QBs.  I then eliminated 7 QBs that played in fewer than 5 games in their rookie seasons (Losman, Russell, Grossman, Rodgers, Pennington, Rivers, Quinn.)  I did not include this year’s other rookies, as we don’t know yet how their career’s will progress, though it certainly looks like each will be successful.

That leaves us with 31 QB’s.  Here is the sample charted by rookie Passer Rating, with Nick Foles in red: 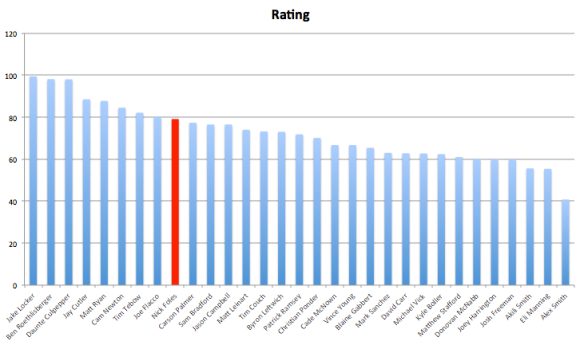 The interesting takeaway is that there are very few “false positives”.  Of the 8 QBs with higher rookie ratings than Foles, the closest there is to a “bust” is Tim Tebow, who is still relatively young and has a chance (however slight) to turn his career around.  Jake Locker doesn’t really impress me, but he did make progress this year and it’s fair to say the jury is still out on him (also note that he played in just 5 games his rookie year, the minimum for the sample.)

Other notes from that chart: 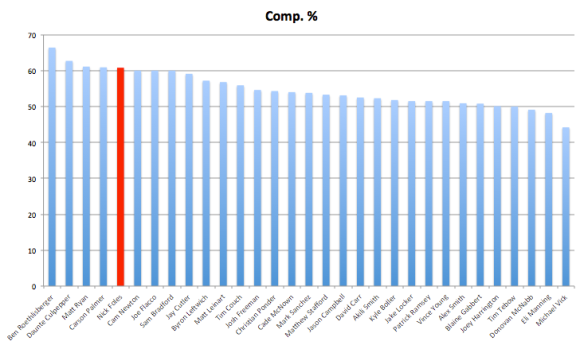 We see a similar story as with the Rating graph.  Only Big Ben, Culpepper, Matt Ryan, and Carson Palmer completed a higher percentage of throws in their rookie seasons.

If Foles had been taken in the first round, there wouldn’t be any talk of even looking at other potential quarterbacks heading into next year.  Additionally, he would have played a much larger role in the head coaching search, and we’d be hearing stories of how “Coach X is really excited to work with Foles”.

The fact is, statistically, Foles had a VERY strong rookie season, especially when one considers the patchwork O-Line he was playing behind.

Now I’ll get back to the draft…

3 thoughts on “More on Foles”