Which positions are most likely to fail/succeed when taken in the first round?

I pulled the data and put together the chart shown below.  Note that counting someone as a “starter” is a bit subjective.  Inclusion in the below data means that a player started for at least 5 years in the league, or if they joined the league less than 5 years ago, has started for more than half the time.  However, just because they have started doesn’t mean they have been good.  Unfortunately, an analysis that deep will have to wait.  For now: 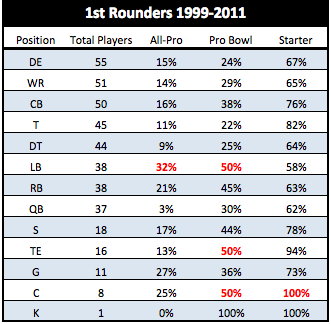 – It does appear as though the conventional wisdom regarding O-Linemen is correct.  They are typically safer picks, as evidenced by the high starter % for G/C/T.

– Choosing a QB is, statistically, a very bad decision.   Just 62% of the 37 QBs drafted in the first round ended up “starting” for a reasonable amount of time.  However, that number is definitely inflated, as the sunk cost aspect of choosing a QB with a high pick (at least until the most recent CBA) led teams to continue starting players who didn’t deserve to.

Unless you’ve got a top pick and there is a truly incredible prospect, you SHOULD NOT DRAFT A QB.  Hopefully Chip Kelly reads this before jumping on Geno Smith at #4.  That’s not to say he should draft him, only that he has to be blown away by Smith to make it a reasonable decision.

– LBs have proven to be the most difficult to peg.  The position has the lowest rate for starters out of the first round (58%), but the highest rates for All-Pros and Pro Bowls.  That tells me LBs are perhaps the hardest players to evaluate coming into the league.

We’ll take a look at the other rounds soon, and eventually put it all together for a complete draft guide, but for now it appears as though there is clear split regarding the odds of success for draft picks (in the first round):