Lots to get to today, including a look at the Eagles pick, an unbelieveable example of the Bad GM Theory in practice, and why the second half of the draft could not have gone any better for the Eagles.

As you all know, I’m surprised and disappointed that the Eagles could not muster any trade interest for the last “top” OT on the board.  It’s possible that they wanted Johnson regardless and didn’t actually entertain trades, but given the reports I’ve seen, that doesn’t seem to be the case.  However, as I’ll explain later, the team might end up with essentially the same value I was hoping to see with the trade scenarios.

I’m sure you can find full bios and histories of Lane Johnson at a lot of other sites, so I won’t do one here.  I’ll just say that he’s an extremely athletic player with arguably more “upside” than Joeckel/Fisher.  In any case, if we look at our positional value range chart, we can see he is clearly a top tier player: 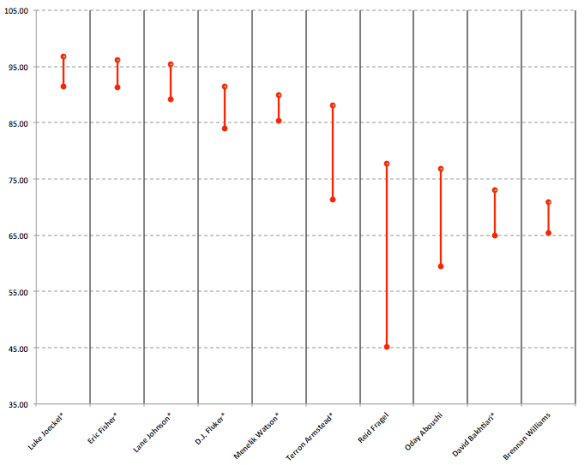 Also, if you want to get really excited about Lane Johnson, I can show you his workout results.  Below is a chart from MockDraftable, a ridiculously fun site (for draft nerds) that compares every player to their position group via an area chart.  The numbers are the historical %tile rankings within the group.  He’ll have to put on some weight, but you can’t argue with his athleticism.  Enjoy: 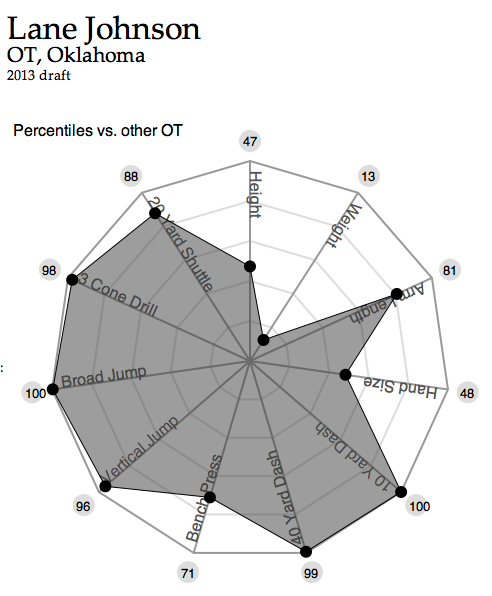 Another factor to consider is that, as we discussed, adding a quality OT actually provides the Eagles with upgrades at TWO positions, since it allows Todd Herremans to move back to RG, his best position.

Consequently, it’s hard to be upset with the pick.  Johnson is as good a player as any (that’s what the top tier means) and the trade-down options apparantly weren’t available.

The Bad GM Theory in Effect

I have to shift away from the Eagles for a moment, but I promise the next section will come back to our favorite team.  If you recall the Bad GM Theory, it says to keep an eye out for any trades between two GMs who are clearly not on the same level.  Trent Baalke (49ers) vs. Jerry Jones (Cowboys) certainly fits the bill.

During last night’s first round, the Cowboys traded down from the 18th pick in the draft to the 31st overall.  In return, the team received a 3rd round pick, the 74th overall selection.  Now before we even get to the players, it must be noted that typically, just a 3rd round pick is not enough to move up 13 places in the first round.

If we refer to the draft value chart, the 49ers should have had to throw in a high 4th round pick as well to even out.  Now the Draft Value Chart isn’t perfect, but it’s pretty clear the Cowboys got hosed on the pick compensation.

The 49ers, interestingly enough, used their upgraded 1st round pick on Eric Reid, a FS from LSU.  My consesnsus ranking has Reid at #41 overall, with the TPR system ranking him #47 overall.  It looks like the 49ers reached, meaning they might have difficulty “winning” the trade, which would go against the Bad GM Theory.

Not content with merely getting ripped off in the trade, Jones proceeded to use his new 1st round pick, the 31st overall, on Travis Frederick, a C from Wisconsin.  As you should know by know, Centers in the 1st round are pretty rare.  It’s almost impossible to be an “impact” Center, meaning the opportunity cost of drafting one in the 1st round is VERY high (the 1st round is the only place to consistently get “impact” players).

Not only is Frederick a Center, but he was a relatively low ranked prospect also.  My consensus rankings have him at #63 overall, with the TPR system boosting him all the way to #59.

So to sum up, Jerry Jones got fleeced on the trade down, then wasted his pick. Bad GM indeed.  Frederick will probably turn into a serviceable player (top Centers have very low miss rates), but as Eagles fans, are any of you upset that the Cowboys got him?  Didn’t think so…

BTW, he was not my “reach of the round” (wow, that’s a lot closer to obscene than I intended).  No, that honor goes to the Chicago Bears, who selected Kyle Long, a G from Oregon.  Kyle Long’s consensus ranking is #74! His TPR ranking is #94!  He was selected with the 20th overall pick.  That means when I bring back the reach/value chart next week to see who deviated most from the consensus, he will warrant a mark of -74.  Simply stunning.  I would not have believed that was possible.  For those wondering why his grade is so bad (ESPN rated him an 89); it’s because NFP rated him a 5.4F, which is as bad as it sounds.  NFL.com, meanwhile, was in the middle with a lukewarm 77, still very low for a mid-1st round pick.

Back to the Eagles

As a result of several inexplicable picks (like the Cowboys and Bears selections above), the Eagles are sitting in a great position going into tonight (when they have the 3rd selection).

Originally, part of my desire to trade down from #4 was to accumulate picks that would allow the team to trade back UP from #35.  That would allow them to get both a top tier player in the top 10, and a very good defensive prospect.  Yesterday, I gave you a few names to watch towards the end of round 1, thinking the Eagles might want to come up and get one of them.  To refresh, here’s what I said:

Turns out, the only player in that group not still available is Xavier Rhodes.  We can also eliminate Menelik Watson, since the team will not take another OT with the 2nd round pick.  That still leaves 3 good defensive prospects.  Carradine and Cyprien in particular are exciting, as both have the “talent” to be true impact players and were rated 1st round picks by both the Consensus rankings and the TPR system.

I also have to mention the elephant in the room (what’s the online equivalent of that term?), Geno Smith.  Yes, he’s still there.  Yes, at #35 overall he would represent GREAT value, regardless of what you think of him.  He didn’t make any sense at #4 overall because the risk/opportunity cost was too great.  That equation has shifted, though, since a 2nd round pick isn’t worth anywhere close to a 1st round pick (at least when comparing #4 to #35).

While I would really prefer a defensive player, I have been hammering the Value message home for a while.  If he’s there at #35, Smith would actually be a great pick.

There’s also rumors that the Eagles will select a TE.  This I am less excited about, since by my rankings, it would have to be a “reach”.  However, I will say that I think the perpetuators of those rumors are those focused on Chip Kelly.  If Howie Roseman truly is running the draft, I don’t see any way the Eagles select a TE.  If, however, Kelly has more input than we’ve been led to believe, then TE becomes a definite possibility.  Either way, we’ll learn a fair amount about the management dynamic by the end of tonight.

I’ll probably hold off until Monday to analyze the rest of the rounds (and the draft as a whole).  It might seem odd for a football blogger to say this, but: You don’t/shouldn’t watch or really care about the 4th-7th rounds.  As I’ve demonstrated extensively, picks thereafter are really just lottery tickets.  The goal should be to accumulate as many as possible and apply them to positions with the lowest margin of evaluative error.  If you are tracking it, the historical success chart I provided a couple of days ago should be your only reference source.  Most of those guys will not play any meaningful role in the NFL, and we have absolutely no way of knowing which ones will “hit”.

4 thoughts on “Ladies and Gentlemen….Jerry Jones!!”