Short post today.  I’ve gone through and found what I believe to be some interesting/surprising NFL stats.  No deep meaning or long analysis, I’ll let the numbers mainly speak for themselves.

– Matt Stafford has thrown more Passes per game than any QB in history.  By itself, that’s not a big surprise.  However, the size of his lead is ridiculous.  Here is the top ten of all-time, taken from Pro-football-reference.com: 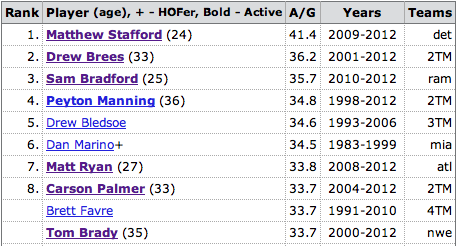 By comparison, Donovan McNabb, during his time with the supposedly “pass-crazy” Andy Reid Eagles, averaged 32.06 attempts per game, nearly 30% fewer passes per game than Stafford.

– Tony Romo has the 5th highest Passer Rating in history, just 1 tenth of a point worse than Peyton Manning.  Check out the top 5:

– Adrian Peterson, Gale Sayers, and Barry Sanders all have career yards per carry averages of 5.0….

D’Angelo Williams, Napoleon Kaufman, and Tatum Bell all have career YPC averages of 4.9.

– Jim Kelly is in the HOF.  Here are some of his career NFL numbers, side-by-side, with Donovan McNabb: