Little to no NFL news to really comment on, other than the Aaron Hernandez saga (which is so outrageous I’d just as soon never mention it).  However, rookies report to Eagles training camp on July 22, just 3 weeks from now; so things will pick up soon.

Today, I wanted to take a brief look at  “big-play” offenses.  In short, I think Chip Kelly’s offense will be far less reliant on big plays than Andy Reid’s did.  Andy Reid, despite being known as a “West-Coast” guy, emphasized the deep ball.  Going purely off memory, I believe this began with the TO acquisition, then continued thereafter.

I expect Chip Kelly’s offense to function much differently.  I think the Eagles will use D-Jax on deep routes mainly to stretch the defense and create space for both the run game and underneath TE routes.  Pure speculation at this point, but Andy liked to set things up for a deep shot, whereas I expect Chip to use the deep ball to open things up underneath.

Let’s back up for a second.

What makes a “big play” offense?

The easiest answer would be the obvious one: big plays.  It’s hard not to like deep strikes and long touchdowns.  With the Eagles’ offense though, they typically came at the expense of the ability to consistently gain first downs.  Is that a good trade-off?

Is there a way to quantify this?

Maybe.  As usual, I’ve attempted to create a shortcut.  Rather than look at the number of long scoring plays, passes over 20 yards, etc., I’ve taken total offensive yards and divided by the number of first downs.

I should probably just attach the usual disclaimer: measure is not perfect, but I believe it gets at what we’re looking for.

So were the Eagles as “big play” dependent as many believe?

Of note here, besides the Eagles high placement, are the teams ranked 31st and 32nd.  Over the past 10 years, the Colts and Patriots, teams known for their high-powered offense, have the lowest yards/first down averages.

The 2012 Patriots actually recored the LOWEST measure in the last 10 years; just 15.4 yards per first down.

Thinking through our perceptions of these teams, this makes a lot of sense.  When I picture Peyton Manning and Tom Brady offenses, I think of methodical movement down the field.  I do NOT think of spectacular deep throws (though both QBs can obviously do that as well).

The magnitude of the difference in averages above seems small.  Here, though, is another table.  This one shows the 15 HIGHEST averages of the past 10 seasons. 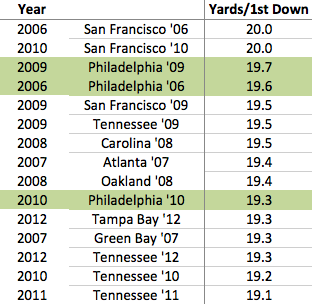 The Eagles feature prominently, as do the 49ers and Titans.  The 2004 Eagles (Super Bowl with TO), averaged 18.7 yards per 1st down, a high measure, though not high enough to crack the table above.

So the numbers match our expectations.  Andy Reid’s Eagles did, in fact, rely more heavily on big plays than nearly any other team in the league.  Note that this is not inherently good or bad.  The correlation value of Yards/1st down to Points Scored is just .065, negligible and an indication of little to no connection.

UPDATE: Here is table showing yards/first down for each team during the Andy Reid era (’99 not included)

So what does this mean going forwards?

The most drastic difference between Andy Reid and Chip Kelly is likely to be offensive philosophy (stating the obvious).  We don’t know what system Kelly will run, and it will likely depend on which QB wins the starting job.  However, as I’ve previously stated, I think the best proxy for what the new Eagles offense will look like is Penn State’s, followed closely by New England.  Going back to our league-wide chart above, we can see that New England’s offense, on a yards per 1st down basis, is about as far from the Eagles’ recent offense as possible.

– Deep balls to set up the short game, rather than the opposite

However, it does NOT mean:

– An expected difference in points scored.