Unfortunately, I haven’t yet found the necessary data to complete the type of 3rd down examination I’m aiming for.  Yesterday, I mentioned that many commentators are overlooking the fact that you have to be a very good offense in order to run a lot of plays (you need to gain a lot of first downs).  That might sound obvious, but it’s important to consider when thinking about Chip Kelly’s stated preference for “pace”.  Just wanting to push the pace won’t mean much if the team can’t gain first downs.

Obviously, that train of thought needs more research.  For today, though, I figured I’d highlight something I stumbled across while searching for data.  See this site:

I have no idea where it came from, but I’ve downloaded the data its supposedly based on and it seems legit.  It’s useful for illustrating an area of the game that I believe is potentially the largest untapped resource of analytical advantage: Run/Pass play selection.

At a very basic level, we can look at play selection through what I will call the Tecmo Bowl Model (or Tecmo Super Bowl if you prefer the upgrade).

I’m making this up as I type, but in my head, it’s an incredibly simple construct for visualizing the importance of Game Theory in play selection.  For those who don’t know the game (I’d be very surprised if any readers don’t, but just in case), Tecmo Bowl was a groundbreaking football game for the original Nintendo system.  I won’t go into any more detail than that, but if you haven’t played it, you should go find an emulator and change that.  The important part is the play selection screen, shown here: 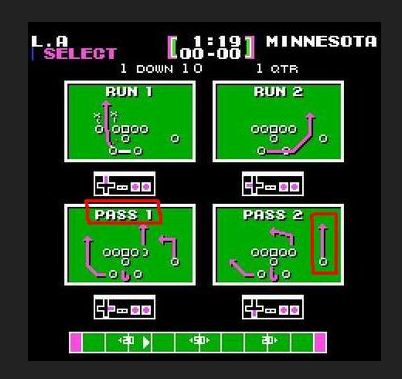 Basically, for both offense and defense, a selection of 4 plays are shown.  The player picks one of these plays by pressing the corresponding button combination (shown below each play).  Here is the key part:

If the Defensive player picks the same play as the Offensive player, then as soon as the ball is hiked, pretty much every offensive lineman is pancaked, resulting in a likely sack or a throw from the QB that’s no more than a jump-ball.

Without getting into any higher-order strategy, the defense has a 25% chance of “picking” the offenses play.

Despite its relative simplicity, I believe this game has a LOT to tell us about modern (and real) football.  In essence, the defense is continuously trying to “pick” the offense’s play.  The results aren’t as dramatic as in the game above, but the fundamentals are the same.

Is the offense going to run or pass? Short or deep? Maybe play-action?

These are all questions defensive play-callers have to ask themselves.  Each subsequent decision is largely determined by both the defense’s overall strategy/strengths AND the subject down/distance/score/time scenario.

Just as in the video game, if the defense successfully “picks” the offense’s play, the result SHOULD be a “win” for the defense.

This has obvious reprecussions for offensive strategy.  It is not enough to just pick a good play; you also need to account for what the defense will be expecting.  Correlating to the statement above: if the offense picks a play that the defense is NOT expecting, it has a distinct advantage and will be more likely to “win” that down.

Let’s take a look at an example.  From the site I referenced at the top: 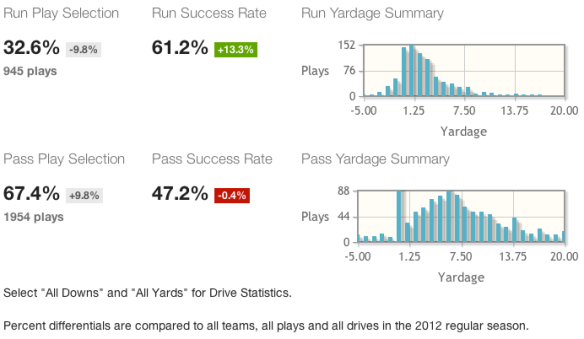 For this scenario, “success” is defined as a 1st down or a touchdown.  What can we infer from the data above?

The output makes it very easy to see the relevant discrepancies.  In this situation, Run plays were 14% MORE successful than Pass plays.

Despite this, Pass plays were called nearly TWICE as often.

There are two leading explanations for this difference:

– It’s simply the result of the type of Game Theory I described in the Tecmo Bowl example above.  Basically, Run plays are more successful BECAUSE they are called less often.  Pass plays are called 67% of the time, meaning the defense is most likely EXPECTING PASS, leaving them more susceptible to a RUN.

The big question is, has this game (long-term play selection) reach its Nash Equilibrium?

The Nash Equilibrium (very basic explanation) is the point at which both sides know the other’s strategy, but neither side is incentivized to change its own in response to that knowledge.

This situation is slightly different, since we’re talking about individual occurences within a long term game, but I believe the overall point holds.  More importantly, I do NOT think the NFL has reached the point of equilibrium (within this particular scenario at least).

Here’s where I need some help.  It seems to me that the point of equilibrium would naturally occur around the Run/Pass split that equates to a roughly equal chance of success for each.  Note that because of the Tecmo Bowl Model explanation above, this does NOT necessarily equal a 50/50 split in play calling.  Regardless, I might be mistaken in my reasoning here.  If you have any other predictions/analysis, please let me know.

Also, lest we fall victim to a small sample, here is the output when we include every season from 2002-2012:

The numbers are almost identical, which means I’m either missing something in my prediction/analysis (very possible), or NFL play-callers are operating at a very inefficient clip.

Obviously, if it’s the latter, it has HUGE implications for in-game strategy.

11 thoughts on “The Tecmo Bowl Model; Inefficiency in 3rd down play selection”