First, I need to let everyone know about a structural change to the weekly Rewind post.  Last season, I typically posted at least 2-3 plays per game, with accompanying diagrams and breakdowns.  As you all have undoubtedly noticed, now everyone is doing it.  I’ve repeatedly stressed that my overall objective here is to provide analysis that ISN’T offered anywhere else, so the proliferation of All-22 Breakdowns puts me in a tough spot.

Therefore, this season, I will still be doing a weekly “Rewind” column, but I will likely focus on particular aspects of the game that I think are going unreported.  That will usually be accompanied by screenshots and/or illustrations when appropriate.  However, I will reserve the play diagrams for only the most important situations.  For now, if you want really good play diagrams, see Derek Sarley at Philly.com or Sheil Kapadia at Birds 24/7.  If you’re at this site, you have probably already seen those breakdowns for this week, but if not, definitely take a look; it’s really high quality stuff.

Now to the game.  After re-watching with the coach’s film:

– RG3 was CLEARLY not 100%. That’s not meant to  detract from the Eagles’ defensive performance (you can only beat who you play), but it’s an important thing to remember as the season progresses.  For example, look at this picture:

This play occurred on a 3rd and 11 with 4:47 remaining in the 2nd quarter.  Connor Barwin rushed upfield, beat the RT outside, and chased RG3 down from behind.  Above, you can see Griffin as he begins to leave the pocket, as well as Barwin as he turns the corner.  The result of the play was a 2 yard gain.  To be fair, RG3 was not running full speed.  However, it’s a good example of what I saw throughout the game.  Namely, RG3 played differently than he did last season (when fully healthy).  Consequently, the Eagles were able to defend him differently.

The Eagles did not have to “spy” or “mush-rush” or run any sort of QB contain scheme with the D-Line.  They attacked RG3 as though he was just another  “normal” QB.

As we all know, what makes the Redskins dangerous is RG3.  Put simply, if RG3 is playing like “just another QB”, then Washington is no longer a division favorite.  As the season moves on and this game recedes into our memory, it will be tempting to say “the Eagles D handled a great offense under RG3”.  That’s a mistake.  Monday Night, the Eagles defense did NOT play against a great offense.  So it was a good performance, but hardly indicative of what we can expect against powerful offensive teams or mobile QBs.

– One of my assumptions about Chip Kelly’s offense was clearly wrong.  I expected the Eagles to focus more heavily on creating “matchup advantages” with their personnel groupings and formations.   However, It looks as though the Eagles offensive options and read progressions will not change depending on the pre-snap defensive alignment.  The Eagles will run the play called no matter what, and just force the defense to expose a weakness.  There aren’t any pre-snap reads or adjustments for Vick to make (allowing the offense to move more quickly).

From a spectator’s perspective, it’s not a big deal.  However, from my perspective, it clears up some of what Chip Kelly’s overall philosophy is.  It’s less about maximizing the “weapons”, and more about the design.  The upshot is that the game-plan should be more resilient in the face of injuries.  The loss of a guy like D-Jax won’t have nearly as big an effect as it would in a more playmaker-focused system.  If the QB makes the right decision, SOMEONE will be open, meaning the marginal difference in skill between receivers becomes less important (scheme gets them open rather than individual skill).  For example, this play (from Bill Barnwell’s breakdown) would probably work with anyone at TE:

The run fake draws the LBs, the bubble screen draws the safety, and Celek is left with an open seam, all he has to do is run straight and catch the ball.  By comparison, think back to Brian Westbrook and all the moves Reid made specifically to get him the ball.  Chip doesn’t appear to work that way. 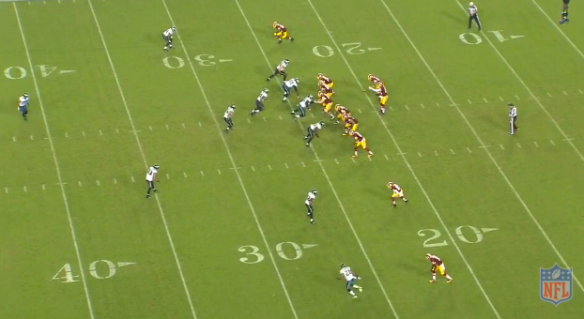 Running the play forward, we get this: 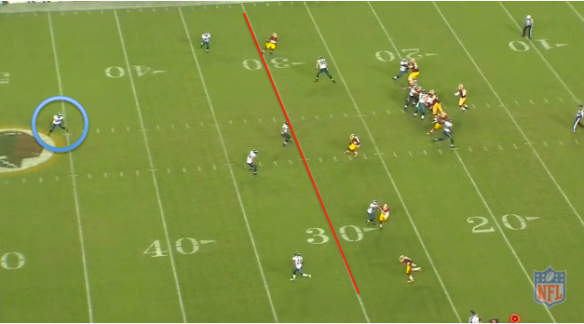 This is one step before RG3 makes his throw.  Notice the 30 yard line, which I’ve highlighted in red.  There are 5 Eagles beyond it, and NO Redskins. Nate Allen, deep at the start of the play, backpedals even more, despite all of the underneath routes from Washington.  Clearly, the Eagles were content to allow short completions at this point.  We can argue about the correct time to shift into this type of defense, but the point is that the 2nd half “rally” was largely a function of the score/time, and less a result of the Eagles not playing well.

– I would have liked to see a bit more scheme flexibilty from Bill Davis.  Given the big lead, and obvious passing situations, I hoped to see the defense shift to a 4-3, putting both Cole and Graham in a position to attack.  Graham ended the game with just 16 defensive snaps.  Going forward, I’ll be keeping an eye on this.  In theory, if you believe the offense will score a lot of points, then the defense should be more concerned with the passing game.  Here’s where Vinny Curry’s inactive/active status becomes interesting.  In general, I don’t have a problem with Curry being inactive, since I assume it’s because he’s missing assignments that we can’t see.  However, he is clearly on of the most disruptive pass rushers the Eagles have.

With a late lead and in passing situations, being able to play a 4 man D-Line composed of Cole and Graham on the ends, and Cox and Curry in the middle, seems like a very valuable option.

That’s all for now.  There were some other players I was watching, but whose performance necessitates a “not enough info” or  “incomplete” grade, particularly the Sopoaga/Logan situation and the Safety play.  I’m sure we’ll get a better look at them next week, in what will probably be a more “normal” game.