There is a LOT to get through from Monday night’s game, but I wanted to dedicate a post to something extremely important.  Remember when I said that Chip Kelly’s biggest opportunity for truly “changing the game” lies in his 4th down decisions?  Well… 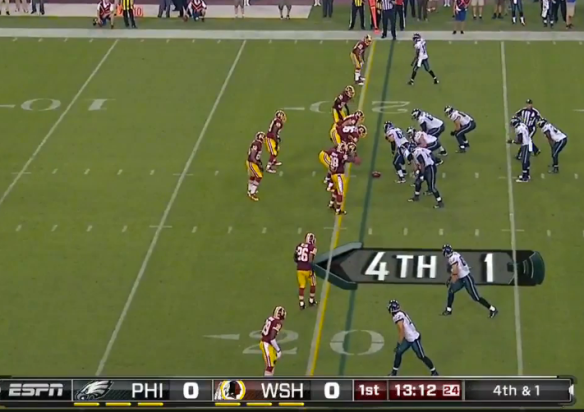 Less than 2 minutes into the first game, Chip Kelly gets his first test.  Obviously, Chip went for it.  In fact, what I liked most about this play was that he continued to use the no-huddle.  Many coaches would have kicked a field goal in that situation.  Several other coaches would have gone for it, but would have called a TO or at least huddled up first, giving him some time to think about a play call.  Few, if any, would attack it the same way Chip did (no-huddle, no hesitation).

I’ve provided the high-level analysis for why, in general, going for it on 4th and 1 is better than kicking a field goal.  Here, though, we have a fresh, real-life example.  So let’s game it out:

Using Pro-football-reference’s play-finder, I searched for all 4th and 1 plays since 2008 season in which a team went for it.  Also, I included only regular season plays beyond the opponents’ 25 yard line and EXCLUDED all 4th quarter plays, since presumably the scoring incentives are a little different that late.  Using that search, we see:

– Teams were successful 63% of the time.

– The average gain for a successful play was 3.31 yards.

I won’t go through the step by step process again, other than to again cite AdvancedNFLStats.com for its Expected Points Concept.  For the step-by-step process, see here.  I’ll illustrate this in a table below, but for now, just know that, using the numbers above, going for it has an expected value of 2.52.

Meanwhile, the Eagles could have attempted a field goal from the 21 yard line.  Given the 10 yard end zone and the additional distance between the LOS and the hold (roughly 8 yards for Henery), that means the actual distance of the kick would have been about 39 yards.

From Bill Barnwell, we can see that the odds of making that kick are about 82%.

We also have to note that a missed kick in this situation gives the Redskins the ball at its 29 yard line (spot of the kick, not LOS).    So a missed kick, expected 18% of the time, is “worth” -0.85 expected points.

Putting that all together, we get this table:

As you can see, going for it carried a higher expected value, and hence was the correct play at that point in the game.

At this point I have to note the caveat that we are using AVERAGE success rates.  For example, it’s possible (likely?) that the Eagles, by virtue of having McCoy and Jason Peters, have a better than average chance of converting 4th and 1.  It’s also possible that Alex Henery carries a significantly different average success rate (though I don’t think so).

So what we have here is a foundation, you can shift the analysis any way you like from there.  If the Eagles are better than average rushers, the expected value of going for it goes up (higher success rate).  Similarly, if the team was playing against a very good defense, we can assume that expected value would decrease (lower success rate).  Those moves, though, are all subjective, I’m merely setting the baseline.

Decisions like these are hugely important from a strategic standpoint.  The 0.21 difference in values above might not seem like much, but it’s significant.   If we think of the “gain” there in terms of an extra possession from the Eagles’ 17 yard line (worth 0.22 EP), it’s a lot easier to recognize the importance of making the right decision.

If Chip Kelly can consistently makes these calls, he’ll already being changing the game, regardless of what his offense does.  Coaches overall should be doing this, but it’s clear that, given the external pressures involved, they’re waiting for more cover.  Chip doing it successfully can serve that purpose, allowing everyone in the league to do things the “right” way, which would result in more entertaining (and optimal) football.