Before the season, I put a 9 win projection on the Eagles team.  I then went through the schedule and explained how, from my point of view, the Eagles had to perform across each stretch in order to actually achieve those 9 wins.  Well it’s now week 4, and the first benchmark I set was after the first 3 games.

Here is what I wrote; the full article can be found here.

3 games, 11 days.  The Eagles first stretch, in my view, comprises these 3 games (Redskins, Chargers, Chiefs).  The Chargers and Chiefs are both home games.  The Eagles, realistically, NEED to win 2 of these 3 games.  Again, it doesn’t really matter which two teams they beat (beating the Redskins would obviously help within the division).   However, the San Diego and KC games count as part of the “easy” side to the schedule.  San Diego is a mess and they’re coming across the country for an away game.  Kansas City is much improved (I think they’ll challenge for the playoffs, maybe get to 9 wins as well), and given the Andy Reid return and the McNabb ceremony, it’ll be a crazy game.

The Eagles just finished that stretch, and only came away with 1 win.  As a result, the team is firmly off-pace.  However, there is some good news, the first of which is that the next stretch, which I labeled “the Darkness” no longer looks so difficult.  Here is what I wrote for Section 2 of the schedule:

This is the part of the season after which I expect a fair amount of hand-wringing.  If/when that happens, remember what we’ve said here.  The Eagles will probably lose 2 of these games, maybe even 3.  Denver is a beast; Peyton Manning against this defense is a very bad matchup.  I don’t think the Giants will be as good as most expect, but it’s still a road divisional game.  Tampa Bay is a bit of a wild card.

The key here is getting 1 win.  Again, it’s most helpful if it comes against the Giants (division) or Bucs (conference), but that’s a secondary concern.

The question now: is there any reason to believe the Eagles can win 2 of the next 3 games, bringing them back on pace?

I believe there is, and not just because the Giants look terrible and the Bucs just named Mike Glennon their starting QB.

Let’s take a look at a few statistics from the season so far.  If you were reading EaglesRewind.com in the offseason, you’ll remember I did a lot of work on finding which statistics correlated most highly with winning.  The most important, outside of the obvious (points for and against), were TO Differential, which gets a lot of attention, and Sack Differential, which does not, though it’s arguably more important. 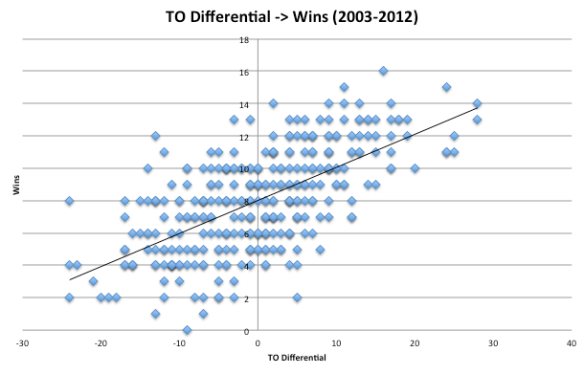 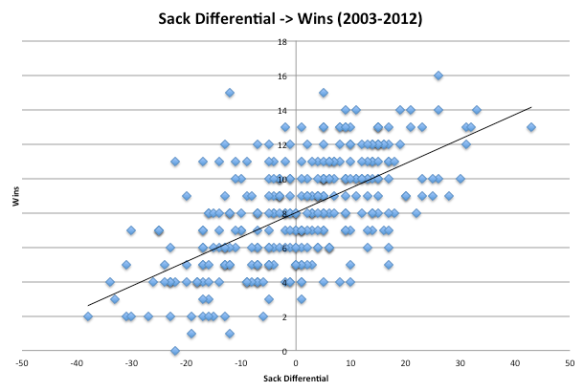 The corresponding correlations are .64 (TO Margin) and .62 (Sacks).  Obviously, each is a very important indicator of team success.  The reason I say Sack Differential is more important is because, in my view, it’s much less luck-dependent.  Whereas in TO Differential, you have things like fumble recovery % to skew the results, there is very little gray area involved in sacks (though there is some).  Overall, a team has much more control over Sack Differential and it does over TOs.

So how are the Eagles doing?

Well the team’s TO Differential is currently -2, which places it 22nd in the league.  That’s not good, but it’s not disastrous either (especially when compared to last season).  Now there are two ways to looks at this number at this point in the season.  Either it’s reasonable, because it’s close to zero, or its bad, because it means the team is “on pace” for a TO Differential of -10 to -11, which would, if you look at the chart above, correlate to a Win expectation of less than 6 wins.

I’m leaning towards the more optimistic case, and here’s why: the Eagles lost 5 turnovers against KC, and KC is one of the best defenses in the league (I know not all the TOs were on offense).  Since it’s so early in the season, single games have a large effect on the overall numbers.  The Eagles schedule has them playing just TWO more teams that rank in the top 10 defenses by Football Outsiders the rest of the year.  As I just said, it’s early, but the overall point is that the most recent event (KC) is more likely an aberration than a true indication of the Eagles’ ability.

I expect the Eagles to finish the season close to EVEN in TO Differential, though it’s a very difficult statistic to predict.  For now, just know that the team probably won’t have any more -5 TO games.  If it can finish around 0, it’d be indicative of an 8 win team (obviously).

Here is the more important area.  Through 3 seasons, the Eagles’ sack differential is also -2.  That’s a bit of a disappointment.  The Offensive Line has not played up to expectations.  Granted, with Vick at QB, you have to assume a higher than average sack rate, but the hope was that a great O-Line anchored by Peters and Lane Johnson (a potential red flag that isn’t getting a lot of attention) and a “quicker” decision system from Chip Kelly would result in far fewer sacks of Michael Vick.

Through 3 games, his sack rate is 10.8% (11 sacks).  For his career, it’s just 8.7%, so clearly things are not going according to plan.  Again, we have to talk about the opposition.  KC will probably finish the year among the league leaders in sacks, and 6 of Vick’s sacks (more than half) came against the Chiefs.  That’s not normal and won’t continue.

On the other side of the ball, the Eagles defense has come up with 9 sacks, led by Barwin and Cox, who each have 2.  The “on-pace” number is now 48 sacks, which would be a VERY good result.  Last season the Eagles had just 30 sacks, and the long term NFL average is roughly 35.  Here’s the good news: I don’t see much reason to distrust this number.

The Redskins have allowed just 6 sacks, 3 of which came against the Eagles.

The Chargers have allowed just 5 sacks, 1 of which came against the Eagles.

The Chiefs have allowed 10 sacks, but 5 of them came against the Eagles.

Against all three teams, the Eagles were able to sack the QB more than the other competition has.  As a result, it’s somewhat likely that the Eagles pass-rush (base, blitzing, whatever), will be legitimately good this year, despite what it has felt like.

If the Eagles can keep pace and finish with anywhere close to 48 sacks, it will be in very good shape, and likely to finish the year with a positive Sack Differential.  If Vick and the O-Line can keep it to between 2-3 sacks allowed per game (so similar to the Redskins/Chargers performances), it’ll finish with around 40 sacks, and a +8 differential.

Checking the chart, that’d be indicative of a 9 win team….

The Eagles are in better shape than people think.  The team still lacks defensive talent, but looking at the first three games together, there’s still every reason to believe that this team is a “True” 8-9 win team.  That should be good enough to contend for the division.  I fully expect people to write the team off after this week’s game against the Broncos.  However, I’d advise you to save your seats on the bandwagon, because in a couple of months, everyone’s going to be scrambling to get back on.

Either that or I’ve been blinded by homerism…

1 thought on “Checking the Benchmark: The Eagles are behind, but not by much.”