Sticking with the preseason review today (no better time to do it than a bye week, other than after the season ends, of course).  This time lets revisit the list of overrated and underrated teams I posted before the season started and see how things stand.

The original post is here.  Below, I’ve included the summary table. 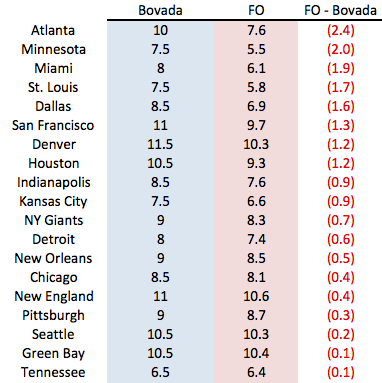 To refresh, I simply took the Football Outsiders projections and compared them to the Vegas lines to see where the biggest differences were and what they could tell us about the expected performance of teams.  As you can see, pretty much nailed this one. The most overrated teams, by this measure, were Atlanta and Minnesota.

Atlanta, of course, is currently 2-9 and arguably the biggest disappointment in the league this year (though I’d obviously argue that they shouldn’t have been so highly rated to begin with.

Minnesota was another gimme.  Anyone taking the Over (7.5 wins) for this team was either crazy or stupid.  Specifically, I said:

I have the Vikings in the 4-5 win range, which is even lower than FO.  While there are a number of explanations (including the points above), it really comes down to Christian Ponder versus a very tough schedule.  I think it’s likely to be a train wreck.

Miami started the season strong, winning the first 3 games, but has lost 6 of 8 since then.  Currently at 5 wins, the Dolphins are likely to surpass the FO projection, and may even get to the 8 wins O/U (I doubt it though).

All told, you’d have done pretty well by following this chart.  Certainly regarding the teams identified as the most significant projection dislocations.  Said differently, if you looked at the original post and took the under on the Vikings and Falcons, you’re pretty happy now.

The Eagles, of course, are not on this list.  FO projected the team to win 7.8 games, while the O/U was set at 7.5, making them Underrated, though only marginally so.  My personal projection was for 9 wins, which still looks pretty good.

Busy week (exams approaching), but I’m hoping to post performance distributions for prominent QBs to continue our discussion (in more detail) about reasonable expectations, so look for that sometime in the next couple of days.