Another day, another confusing report about DeSean Jackson.  Until something actually happens (like a trade or release), I’m not going to spend too much time discussing it.  There’s just not much value in speculating when we’re clearly missing a lot of information.  However, I have noticed something worrisome over the past week.  Namely, people seem to be underrating DeSean Jackson.

Make no mistake about it, DeSean Jackson is a great WR and he cannot be easily replaced.  I find it remarkable that I feel compelled to write a whole post about this, but here we are.

D-Jax entered the league in 2008.  He’s played 6 mostly healthy season with the Eagles, with 87 games played.

Take a moment and make a list of the 10 best WRs over the last 6 seasons.  Seriously, jot it down.  Is DeSean Jackson on there?  Probably not, and I’m guessing many of you didn’t seriously consider putting him on there.  Was that a mistake?

Following is a list of the top WRs over the last 6 seasons, as measured by Approximate Value.  AV is certainly not a perfect measure, and I don’t mean to suggest it is.  However, it’s a very good one, especially for offensive skill players.  Anyway, here’s the list:

Now go back to your list of the 10 best WRs.  If you actually made it, I’m guessing there’s a LOT of overlap with the top ten WRs by AV.  Of course, the point of this exercise is to highlight where DeSean Jackson is (and is not).  By AV, he ranks 8th (tied), ahead of Larry Fitzgerald, Anquan Boldin, and Greg Jennings.  He ranks just behind Steve Smith.

The point is NOT that Jackson is a better WR than those players, that’s a different discussion.  The point is that he has been among the best WRs in the game since entering the league.  Note that Jackson gains AV points for his Return work as well, inflating his WR ranking.  Of course, it doesn’t make much sense to hold that against him either.

Let’s stick with AV for a moment, but take a slightly different look.  I’m always bothered by the “since he’s been in the league” ranking, because it’s a very arbitrary measure, typically skewed in favor of the subject player.  So, let’s change our filter.  Instead of looking at all WRs from 2008-2013, let’s just look at the first 6 years of each individual player’s career, going back to 1990.  Here’s the top 20:

Spend a minute examining that list, and note that it underrates Michael Irvin by virtue of the 1990 cutoff date.  Regardless, notice anything?  Nearly half of them are sure-fire Hall of Famers.  Most of the other half at least deserves consideration.  Now you’re starting to see why I think giving Jackson up for little return is insane.  In terms of pure production, DeSean Jackson is a GREAT receiver. Full stop.

BTW, here’s the same filter, but sorting by Receiving Yards instead of AV.  Again, we’re looking at the most Receiving Yards over the first 6 seasons of a player’s career, for all seasons since 1990.

Now let me attack the “replaceable” nonsense.  There seems to be an argument out there that basically says: “This is an extremely strong draft for WRs, we can just draft his replacement then.”  This is a fairly ridiculous argument.

1) Draft prospects are not guarantees!  Remember the post I did on Hacking the Draft?  Let’s take another look at the chart from that study. 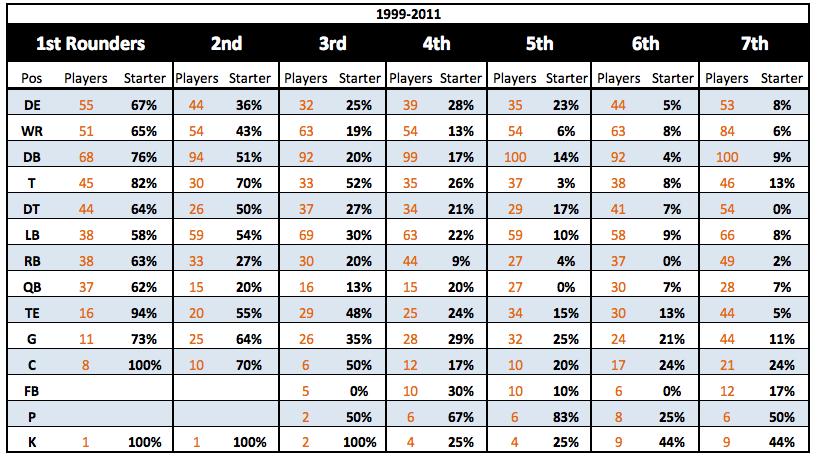 See the odds of landing a “starting” WR with a 1st round pick?  Just 65%.  It’s possible that this year’s draft has a higher probability of success.  I’m willing to accept that assertion, but how much higher?  Certainly, given what we KNOW about the draft, not all of the WRs drafted in the 1st round this year will pan out.  Pulling from the studies I did on Skill vs. Luck in the draft, we ALSO know that there’s really no reason to believe the Eagles are more likely than any other team to be able to identify the WRs who WILL pan out.

So if you were planning on replacing D-Jax via the draft, think again.  It’s very possible, but it’s far from guaranteed, and we haven’t even accounted for the opportunity cost of a 1st round draft pick.

Let’s say you DO “hit” on a WR if the first round.  Surely then you’d have adequately replaced D-Jax, right?  Not so fast.

Here is a list of the best rookie WR seasons, by AV, since the 2005 season.  Note that, last season, DeSean registered an AV of 11.

Since 2005, just ONE rookie WR (Harvin), has registered an AV as high as DeSean did last season.  Moreover, look at the column labeled “Draft”.  12 of the top 20 seasons by rookie WRs were from players NOT drafted in the first round!  Like I said, finding a great WR in the draft is NOT EASY, and certainly not just a matter of taking the best available guy in the first round.

In fact, since 1990, just THREE rookie WRs have registered AV’s above 11.  Randy Moss, Terry Glenn, Joey Galloway.  That’s the list.  23 years, 3 players.  Again, you’re probably not replacing DeSean’s production with a rookie from this year’s draft, at least not next season. 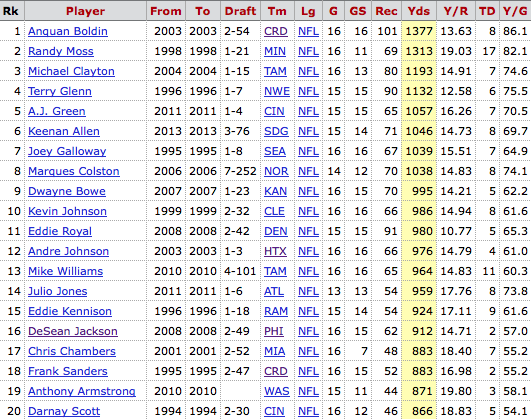 This is going to be tough, but go ahead and count how many rookie WRs had more than 1332 receiving yards….finished yet?  Thought so, counting to ONE doesn’t take that long. Note also that just 8 rookies have exceeded 1000 yards receiving. Remember, we’re looking at every WR in the league since 1990.  That’s a long time.

There’s a lot more to say about DeSean, but I’m going to stop there.  The main takeaways from today’s post are:

1) DeSean Jackson is a GREAT player.

2) The Eagles will NOT be able to replace his production next season, even if they “hit” on a WR in the first round.