Yesterday I mentioned that sack differential and turnover differential have a similar correlation to winning.  However, I also said that despite the relatively equal importance of both, teams should focus more on the sack numbers, as that measure is likely much less random (luck-based).  Today I wanted to illustrate that:

First we’ll look at the persistence of both sack differential and turnovers.  We’ll run the same correlation analysis as we have previously done, this time looking at whether one year’s data point is related to the corresponding data point the following year.  If the value is high (absolute value), then the measure is less random, whereas if there is no correlation then it is largely determined by chance (luck). 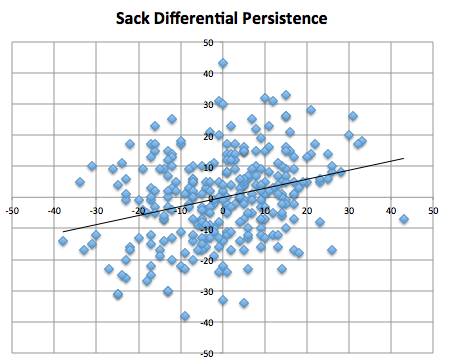 I’ve included the trend line because without it it’s tough to see the relationship.  The correlation value is .29.  Not huge, but significant.  However, by itself it doesn’t tell us too much.  We’ll look at turnover differential persistence now, then we can compare the two. 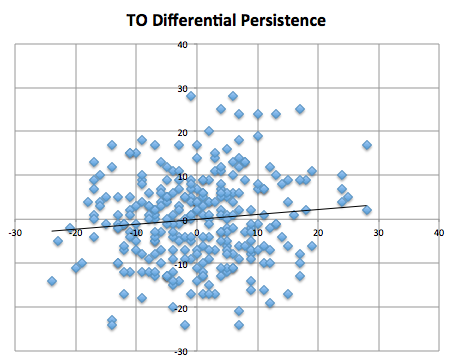 The value here is .11.  So there is some persistence here, but not nearly as much as we saw in the sack differential.  This tells us that although both turnovers and sacks are very important when it comes to winning, sacks are much less luck-based, meaning there is a lot more teams can do to effect the measure.  Given the choice, teams should look to improve line-play over trying to force/prevent turnovers. (I realize they’re not mutually exclusive concepts, we’re operating in a vacuum here).

A common theme in this blog is how important the efficient allocation of limited resources is when it comes to putting together a football team.  It’s vital that teams understand what is luck and what isn’t, so they know where to focus their efforts in order to maximize the impact of those efforts.

I’m assuming little of this is very surprising to readers here.  We can, however, take the analysis one step further.  Sack differential (and turnover differential) includes both offensive and defensive numbers.  What happens if we break them out?

I looked at both sacks and sacks allowed, to see if there was a noticeable difference in persistence.  First the charts, then the numbers, then interpretation. 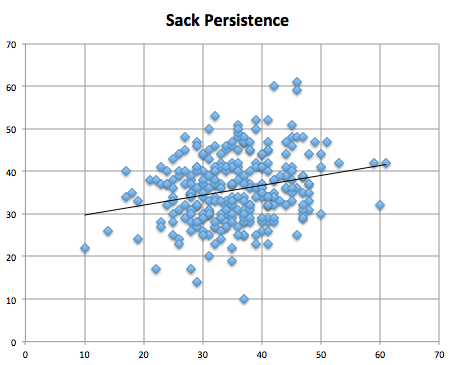 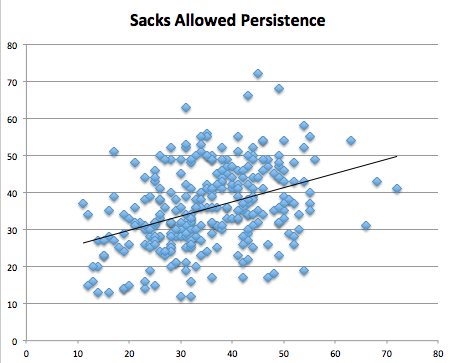 Here are the values:

I don’t know about you, but I’m a bit surprised at how large the difference is.  There are a TON of variables to consider here.  Both sacks and sacks allowed can be greatly effected by the QB, scheme, line-play, schedule, etc…  Regardless, the above analysis shows that teams appear to have much greater control over how many sacks they allow as compared to how many sacks they create.  This makes some sense, in that the offense has control of every potential sack situation (QBs have a lot more control than defensive players by virtue of having the ball and being able to throw it away.)

In yesterday’s post, I talked about looking at LOS play as a continuum, rather than viewing the OL and DL as discrete units.  If we continue with that train of thought, and apply the above analysis, it certainly appears as though teams should pay more attention to the OL than the DL.  The goal of preventing sacks on offense is much easier to achieve than the goal of creating them on defense.

Therefore, all other things being equal, I’d much rather have a great OL than a great DL.  This has obvious implications for the Eagles.  There is a general consensus that the team will be looking at either OT or DT with the #4 pick in the draft.  IMO, the analysis here would support leaning towards the OT.  Note that we’d still have to evaluate it in the context of the Default Draft Strategy card I put together a few weeks back (which we’ll do once all the scouting shakes out).

For general reference, not everything I show will be counterintuitive or incredibly surprising.  I believe it’s important, though, to illustrate concepts that we take for granted or that have a clear logic to them, if for no other reason then to confirm their validity and hopefully get a better sense for their magnitude and/or context.

I’m going to spend most of today and tomorrow in a car, so I probably wont be able to get anything up tomorrow (or respond to comments).  Be back on Friday though.  Please do comment, as I think that’s extremely important for both developing ideas and challenging my assertions.  Not everything I do is right (shocking), but if nobody points it out or argues, I probably won’t realize it.

4 thoughts on “Persistence of sacks”