As of this writing, the Eagles haven’t made any FA news, so I’ll continue with our draft talk. Today we will look at the 2010 NFL Draft (B-Graham year).  For those of you who noticed, I’ve skipped 2011 for two reasons:  2010 is more interesting, and I can only find 1 set of prospect ratings for 2011.

I haven’t really emphasized this yet, but a MAJOR part of the PVM ranking system is the consensus prospect ratings.  The average rating is far more important than the PVM adjustment.  As a result, if I have only one set of ratings the rankings will not be nearly as valuable.  To that end, if any of you know where I can find 2011 prospect grades/ratings (numerical), please either email me, tweet me, or respond via comments.  I still hope to find another set to work with (right now I only have ESPN’s).

In the meantime, here are the top 32 prospects for 2010 via the PVM system.  For these, I used ESPN and NFL.com ratings, though the NFL.com ratings had to be adjusted to a 100 points scale.  Remember, the right-most column is the player’s actual draft pick minus his PVM Rank.  So players with a negative number were drafted HIGHER than their PVM Ranking.  Only players chosen in the top 2 rounds are included in the analysis. 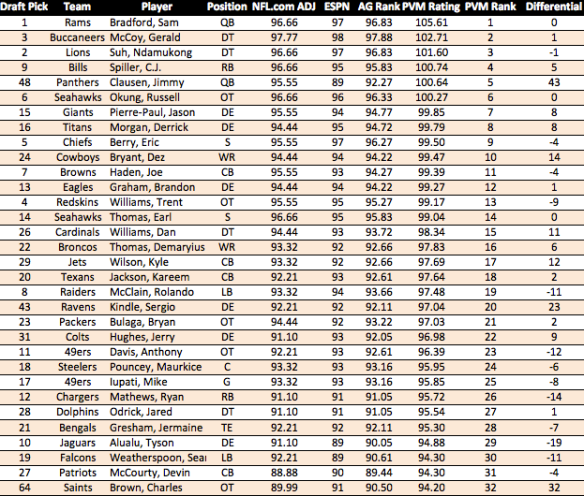 I’ll break this down so it’s easier to see in a second, but a couple of big notes first:

– Jimmy Clausen shoots WAY up the board.  While the PVM adjustment helped, this is mainly due to the fact that his average rating was 92.27.

– CJ Spiller jumps into the top 5.

– Brandon Graham, regardless of the trade involved, appears to have been taken right where he should have.  However, both JPP and Derrick Morgan rank higher and were on the board when the Eagles picked.

To be fair, all three players were taken by the 16th pick (Eagles originally has the 24th), so had the team not traded up there was a strong chance they would not have been able to choose any of them.

Now let’s take a narrower look.  Here are the most OVERDRAFTED:

– Tyson Alualu and Tim Tebow stand out as the worst “value” picks in the first round.  Tebow, even with the positional impact bump, rated as the 44th prospect (he was taken 25th).  The Jaguars, picking Aluala, were derided (correctly) at the time.  If I remember correctly, the Jags justified it by saying he was the best guy on their board.  However, it was pretty clear at the time that they could have traded down and still got him.

It’s a valuable reminder that there is a lot more to “winning the draft” than just setting your board more accurately than other teams (better scouting).  As I’ve explained, the “skill” portion of the draft involves moving around so you get the guys you like at draft spots where they offer maximum value.

– Nate Allen’s here as well, drafted 12 spots ahead of where the PVM ranking has him.  This was a 100% “need pick” and clearly hasn’t worked out the way the Eagles hoped.

– Conversely, Anthony Davis has worked out for the 49ers, despite being taken 12 spots ahead of where he was ranked.

One big note here that, although obvious, I feel compelled to explain:  Every team will have their own individual position values, which means each team’s PVM Board (if they made one) will look different from the one above.  For that reason, it’s tough to grade teams on individual picks because we don’t know what their internal positional ratings are.  It’s possible that the 49ers place a higher premium on OT than the rest of the league (likely in fact).  In that scenario, their PVM board (with no regard for scouting), may have had Anthony Davis (and Iupati) ranked higher, which might justify taking both OL well ahead of their rankings above.

Prior to this year’s draft, I hope to compile individual PVM ratings for each team.  It will probably be very “noisy” due to various contract issues, but it also might help us infer what teams might do.  Perhaps I’ll even put an “ideal” mock draft up, showing what each team should do with their picks under this system.

Now back to 2010.  Here are the most UNDERDRAFTED players:

Some BIG hits here as well as some BIG misses.

– Clausen I mentioned above.  Though he appears to be a miss, the idea here is that at the time of the draft, his potential upside warranted a much higher draft choice than 48 overall.  That said, it’s conceivable that he has just been lost behind Cam Newton and can still be a productive player on the right team (though I’m not holding my breath).

– Sean Lee and Dez Bryant both fly up the board here.  Bryant ranked #10 overall by PVM.

– At the bottom of that chart we can see JPP and Derrick Morgan, who both ranked as top 10 prospects by PVM.

– Charles Brown jumps a full round by PVM, though it’s still unclear how his career will pan out (injured his knee this year).

– Terrence Cody and Sergio Kindle both rank high, and coincidentally or not, were both selected by the Ravens.  Though neither player has played up to their projections, it’s interesting to note the Ravens’ multiple selections. I’ll be keeping my eye on which teams show up more/less on the over/under-draft lists.  In theory, teams that are applying a system of this type should find their way onto the under list with some frequency.

That’s all for today.  Hopefully we’ll have some Eagles FA news to discuss soon.  Again, if anyone knows anywhere to get past prospect rankings, please let me know.

8 thoughts on “Revisiting the 2010 NFL Draft with PVM Multiplier”