If you haven’t seen the new Total Prospect Rankings, see either yesterday’s post or the PVM Rankings tab at the top.

There are a number of ways we can slice and dice this information, and over the next couple weeks I’ll look at a bunch of them.  Today, we’ll look at the “riskiest” prospects this year.  Note we are only looking at the top subsection of players (137 total, of which I posted 130), so we aren’t including players who are likely to be late round picks.

As I discussed yesterday, “risk” in the draft is composed of two components, the individual player’s risk and the larger positional risk, as quantified by the historic success of players drafted at each position.

First let’s look at the individual component.  Here is a chart showing the prospects with the highest standard deviations in their consensus ratings.  Note that the measure here is HALF the true standard deviation.  Also, for this chart I’ve only used Top 60 prospects.  The worse prospects tend to have higher standard deviations, so using the whole sample results in a bunch of guys that aren’t really worth talking about just yet.

The columns should be self-explanatory, but: “Consensus” is the average scouting score.  “.5 SD” is the measure we are looking at.  “Pos Miss Rate” is the historical failure rate for each position.  “Risk Adj” is the combined risk component, as described yesterday. 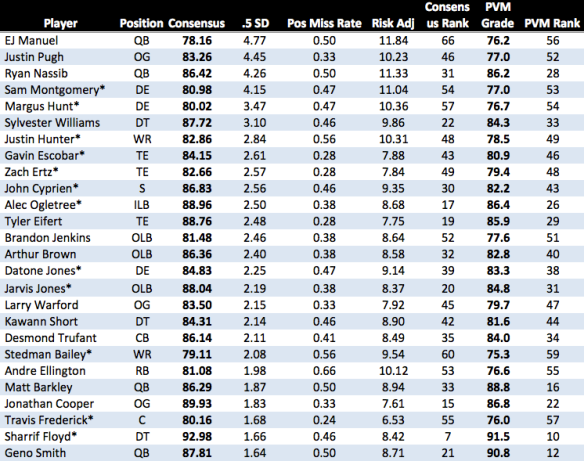 Immediately, the two QBs at the top jump out.  EJ Manuel and Ryan Nassib, both potential targets for the Eagles in round two (or late round 1) carry very high “individual risk rates”.  The three scouting groups I’ve used have widely different opinions of these players.  Therefore, they are riskier choices.

– Sylvester Williams, DT.  Ranked 22nd overall by the Consensus Scores, he drops to 33 in the TPR system (due in part to his placement above).  He carries the 6th highest individual uncertainty score of all the top prospects.

– John Cyprien, S.  He is a popular target for the Eagles 2nd round pick, but does not fair well in the TPR system.  There is relatively wide disagreement among scouts about his ability, and while he ranks 30th in the Consensus Scores, he drops to 43rd in the TPR rankings.  Note that the Eagles 2nd round pick is nearly halfway between those two rankings, meaning he remains a viable option for the Eagles at pick #35.

– Towards the bottom, we can see Sharrif Floyd carries the highest individual uncertainty among Top 10 prospects.  This is part of the reason I am firmly in the Star>Sharrif camp.

Now here is the chart showing the players with the LOWEST individual risk grades: 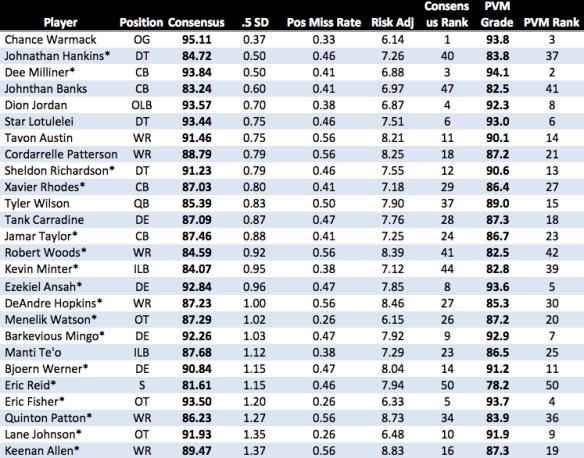 This is perhaps the more interesting chart for Eagles fans, as it includes many of the potential targets for the 4th overall pick.

– Chance Warmack remains a pain in the ass.  I originally conceived of the positional adjustments in an effort to explain why Chance is a terrible use of resources in the Top 10. However, through two iterations he remains near the top of the TPR draft board.

Here I have to stress two things about Warmack that people aren’t mentioning enough:

1) He is the highest rated prospect by Consensus Score.

2) He has the lowest standard deviation, suggesting there is widespread agreement that he is the best prospect.

I’m close to the point of saying that our (and MY) preconceived notions about positional value may be blinding us to what should be an obvious assertion, namely: Chance Warmack should be a top pick.

I’m not there yet, but the entire idea here was to take subjectivity and bias out of the equation, and on that basis, Chance Warmack looks pretty good.

– Dee Milliner, Dion Jordan, and Star Lotulelei all place near the top of the board.  That means, on an individual basis, we should be more confident in their scouting grades then in the grades of players lower on the list.

How about Total Risk?

This is one area where I am not 100% comfortable with the model.  Should individual uncertainty carry more weight?  I don’t know, but maybe, and it’s something I’m thinking about as we get closer to the draft.

Anyway, here is a chart showing the Top 60 prospects with the HIGHEST risk components: 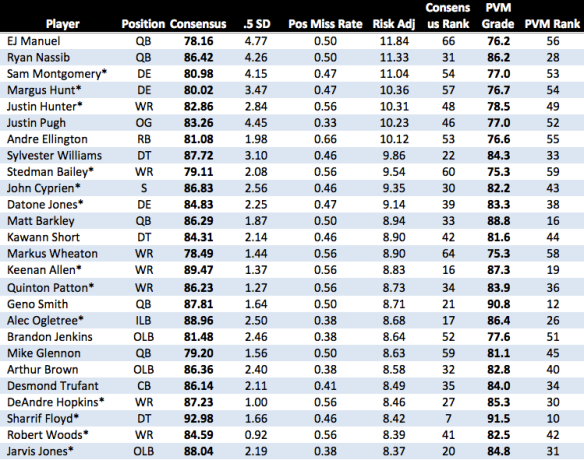 Nobody should be surprised to see EJ Manuel and Ryan Nassib at the top of the list.  A lot of individual uncertainty + a large positional risk rate = a big risk component.  These guys may become good/great players, but given where they will likely be drafted, they represent the riskiest picks in the entire draft.

– We already discussed Williams, Cyprien, Floyd.  For obvious reasons, they are included above.

– Keenan Allen is another one to note. Ranked 16th overall by Consensus Score, he is one of the “riskiest” top prospects, despite the fact that the TPR system only drops him to 19th overall.

While the guys above probably don’t seem familiar to most of you, they are all players that we’ll be seeing/talking about towards the bottom of the 1st round and through the 2nd round of the draft.  Might as well start familiarizing yourself with them now. 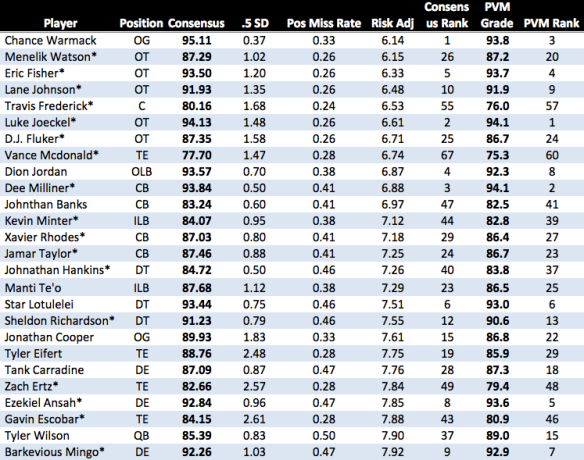 Not surprisingly, we see mostly offensive linemen at the top of the list.  The biggest name for Eagles fans is Eric Fisher, who is probably the most likely pick for the Eagles at #4.  Based on the current measure of risk that I’m using, Fisher is the 3rd SAFEST top prospect.

Some other things to keep in mind:

– Pay close attention to the CBs listed near the top of the list.  Guys like Rhodes and Taylor could be great pick-ups for the Eagles if they fall to the second round.

– Menelik Watson is another guy to keep an eye on.  It’s possible (though I think unlikely) that he’s available at #35 and, should the Eagles pass on Fisher at #4, would be a prime target for the team.

As I said, I’ll be looking at this info in a number of different ways, but please feel free to suggest anything in particular that you’d really like to see, either through twitter, email, or the comments.

8 thoughts on “Who are the Riskiest/Safest Top Prospects?”