Now it’s time to go back to our TPR rankings and see which players represent the biggest potential “reaches” and “values”.  Today I’ll do the “reaches”.  A couple of notes before I start:

– The TPR system is only designed to analyze the first 2 rounds of the draft.  Therefore, today I will only be looking at players drafted in those two rounds.

– In general, I think we’ll be much more successful in identifying “busts” than we will be in identifying “values”.  If a player falls dramatically, my first assumption is that the league knows something that we and the media analysts do not.  It could be due to an injury risk or personality defect; neither of which we can measure.  The “busts” however, represent the reverse, where a single team picks someone well above their perceived value.  In this case, it’s likely that the team is being overconfident in its own assessment.

So who were the biggest round 1 and 2 reaches?

Below is a table illustrating the players that were most heavily “overdrafted”.  The column with red text represents the prospect draft pick minus their TPR ranking.  So if prospect X has a score here of -30, it means he was drafted 30 spots earlier than the TPR ratings suggested he should be.

Due to team differences in scheme and the relatively close ratings of a lot of prospects, we aren’t really concerned with small differences.  Large ones, however, should be very informative. 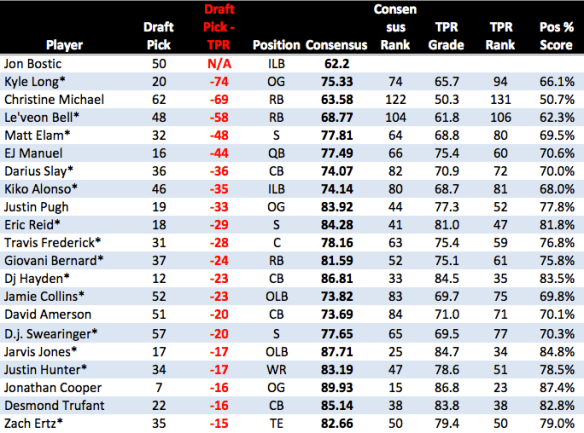 Overall, there was significantly MORE deviation than what I expected to see.  Before I break down the chart above, let me advance a theory about this draft:

It might be a lot worse than we think.

In the first round, 4 of the biggest “reaches” were for interior offensive linemen.  What might that tell us?  Well if the ENTIRE draft is weaker than we suspect (not just weak at the very top), then several teams might decide to make their picks purely based on risk.  If the risk/reward tradeoff for every player is skewed towards the risk side, then it would make perfect sense to “reach” for a relatively low-risk player like an OG or C.  By doing this, you will appear to have passed on the opportunity to select an “impact” player.  However, if there aren’t any (possible, though unlikely), coming out of the draft with a decent starter at a low impact position isn’t a bad outcome.  I hope this is not the case (and I don’t think it is), but it would explain a lot of the perplexing decisions made on day 1 and 2 of the draft.

Now back to the chart.  Here are my takeaways:

– In my opinion, the Bears had the worst draft (see the next two bullets).

– The biggest “reach” of the entire draft, based on TPR, was Jon Bostic, an ILB from Florida.  The Bears drafted him with the #50 pick, and I did not even have him in my top 137 players.  Since he’s a LB, the Bears will get the benefit of the doubt, but if you’re looking for a potential bust, he’s a very strong candidate (though in the second round it’s not as noticeable or meaningful).  He may turn into a good player, but at the very least, it appears as though the Bears should have waited a round (or two) to take him.

– Kyle Long was one of the aforementioned 1st round interior linemen “reaches”.  He was drafted #20 overall, despite a TPR ranking of just #94.  1st round Guards have a very low miss rate (Danny Watkins was a rare exception), so Long will likely have a productive career.  However, the Bears probably passed on several better prospects at more impactful positions.  This is an under-the-radar reach, since the player will probably contribute, but it represents terrible value nonetheless.

– That’s twice in the first two rounds that the Bears “got their guy” regardless of the actually value of each player.  Either the Bears know something nobody else does (or very few teams do at least), or they just screwed up.  Time will tell, but I know which side I’d bet on.

– Two RBs are near the top of the list, Christine Michael and Le’Veon Bell.  Both were taken in the 2nd round, so the bust potential is somewhat limited.  Running Backs, though, are terrible “value” picks near the top of the draft.  They’ve been proven to be, for the most part, interchangeable.  Neither of these guys (nor Bernard, also on the list), projects to be a LeSean McCoy-type impact RB.  If that’s the case, it would have been better to draft a higher rated prospect and search for a RB later.  In my success-odds table/database, second round RBs became starters just 21% of the time, well below the odds of prospects at several more impactful positions (for example, 50% of 2nd round CBs became starters).

– The Bills might have screwed up big-time with the EJ Manuel pick.  Not only was he a big “reach” by our rankings, he was also not even close to being the top QB on the board. I believe two things happened here:

1) The Bills had Manuel as “their guy”, which as you know, is a dangerous place to start from.

2) The Bills were likely bluffed into taking Manuel much higher than they needed to.  I know there have been rumors that several other teams (including the Eagles) also wanted Manuel, but given the way the rest of the draft went, it’s more likely that the Bills fell for the smokescreens.

The fact that the Bills have a less-then-sterling record when it comes to QBs only increases the inherent risk of this selection.  (Bad GM Theory)

– Everyone (including me) gave the Cowboys shit for drafting Travis Frederick early, but note that he is far from the biggest reach in these rankings.  Still, it looks like he was picked about a round too early.

– Matt Elam, picked by the Ravens, will be an interesting prospect to watch.  Since it was the Ravens and Ozzie Newsome that made the pick, everyone assumes it was a good one.  However, I’ve got it as a big reach.  I should note that Elam’s TPR ranking is lowered significantly by his NFP grade.  If I had to bet, I’d certainly pick Newsome and the Ravens over the NFP.

– The Eagles do make an appearance on this list, at the very bottom.  Zach Ertz was selected 15 spots higher than his TPR ranking.  As I explained on Monday, I’m not overly concerned by this, since 15 spots in the second round isn’t a MAJOR deviation.  However, it is entirely possible that Chip Kelly’s desire for a TE led the Eagles to make a poor “value” selection.  I’m betting on Chip here, and think Ertz will be a significant contributor.

For what it’s worth, here are the highest ranked guys (in TPR) that were NOT selected in the 1st two rounds: