Today I’ll cover the players that “fell” in the draft and see if we can identify any potential “steals”.  However, I want to start by doing something I should have done yesterday.  I have ESPN ratings and NFL.com ratings for several past years (I do not have NFP ratings or NFL.com ratings for 2011).  Therefore, I can run the TPR system through the 2010 and 2012 drafts and see if it correctly identified potential busts and steals.  I showed this analysis once before, but have since updated the model (and its more interesting now anyway).

As I explained yesterday, the model should be more successful in identifying busts than it is in identifying steals.  If a player falls dramatically, there is usually a reason for it, and one that can’t be quantified and put in our model.   However, players that go well ABOVE their TPR rankings, are usually just indications that teams did in fact “reach” for a player.  For 2010, this is what the biggest “reaches” list looks like: 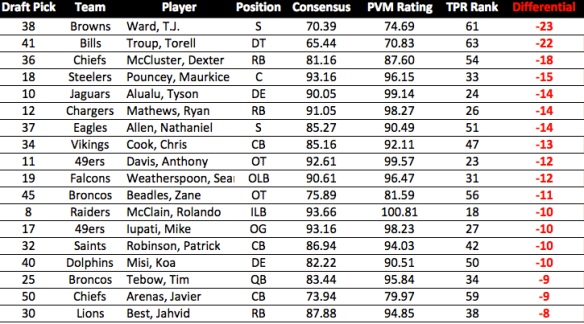 You’ll notice that, compared to this year, the “reaches” in 2010 were not nearly as significant.  Still, in the above chart, we’ve done a good job of identifying the players who were not “worth” their draft spot.  It’s not perfect, obviously, but the “bad” selections far outnumber the “good ones.

Consequently, I’m comfortable saying that when a team “reaches” for a player, rarely do they “know more” than everyone else.  In fact, the few successful cases may just be the result of luck (if you reach on enough players, a couple of them are going to work out).

Now you can go back and view yesterday’s post with a bit more evidence behind it.

Unfortunately, as I mentioned above, the “steals” are not nearly as easy to identify.  For example, here is the same 2010 draft class, with the “value” picks shown: 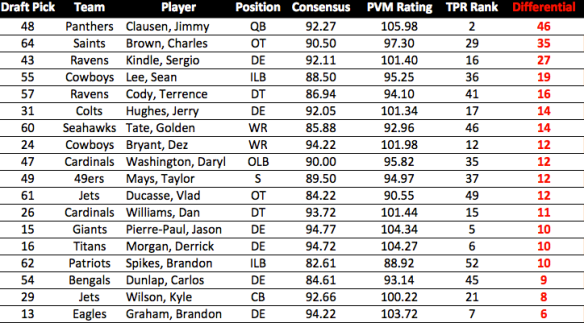 There are definitely some players in there that qualify as “steals”.  However, they are mostly concentrated in the 8-12 region (that’s draft spots below TPR ranking).  I’m not entirely surprised.  Jimmy Clausen, for example, rates extremely high on the TPR system, due to his impact position and high consensus rating from ESPN and NFL.com.  Clearly, though, teams saw something about him that is not reflected here. They seem to have been justified (though he hasn’t been given a great chance).

So what can we learn?  I’m not sure, but perhaps we can be skeptical of anyone who fell “too far”.  That’s not as scientific as I’d like, but we have to start somewhere.  If a player fell more than a full round (30+ picks), we can assume that almost every team passed on him, meaning there’s likely something about that prospect that our model isn’t picking up.

Here is the chart for this year.  I’ve cut the sample to players drafted in the top two rounds (for reasons I explained yesterday) plus the 10 remaining players with the highest TPR rankings. 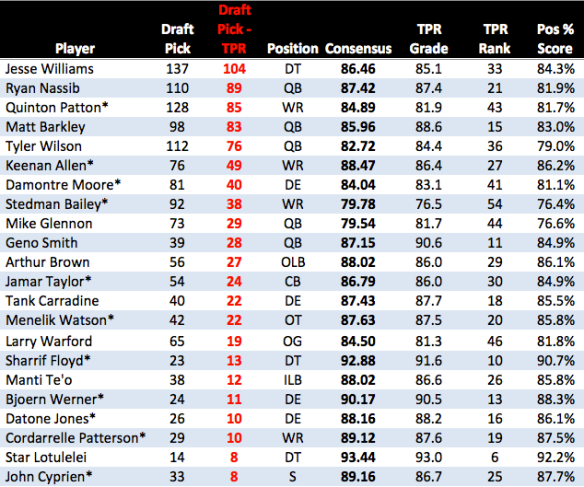 Several of these players have “health issues”.  Jesse Williams and Keenan Allen are both reported to have injuries that raised flags with most teams.  That’s obviously not what we’re after here, but if healthy, those two are pretty obvious candidates for “value”.  After reviewing the 2010 data, we should be skeptical of the other players that “fell” more than 30 places (roughly a full round).  As we saw with Jimmy Clausen, it’s likely teams saw something in Barkley, Nassib, and Wilson, that can’t be represented quantitatively.   I obviously hope they’re wrong about Barkley, but that’s probably not the case.

So where does that leave us?

I’d suggest that we focus on Arthur Brown and the players below him on the chart.

– Arthur Brown is, today, widely regarded as having been a great “value” pick.  I have no idea why he fell so far, but there have been no reports of injuries or off-field issues that I have seen.  However, pointing to him is cheating a bit, since every “draftnik” is already calling him a “steal”.

– Similar story with Sharrif Floyd.  While the TPR system did not rate him as highly as some “experts”, he was still graded a top 10 pick, and he fell 13 spots to #23.  Obvious candidate, and you didn’t need to come here to know that.

– The rest, however, I’ll take credit for, particularly those at the bottom.  Notice that Star Lotulelei, John Cyprien, Bjeorn Werner, and Cordarrelle Patterson all carry relatively high “positional scores”.  That means, ignoring of positional impact, they are good prospects.  Star, though he only “fell” 8 spots, jumps out due to his 92%+ score, but the others are clear “value” picks as well.

I was hoping Cyprien would be the Eagles #35 selection, but I was obviously not the only one who liked him (he was the first pick on day 2).

– The other players I’d point to are Jamar Taylor and Menelik Watson.  Each of them fell a significant amount (more than 20 picks), so it’s possible there are some behind-the-scenes issues with both players.  However, given the significant rankings deviation we saw throughout the draft, it’s also possible these guys were just overlooked.

Neither projects to be an “impact” player, but both have solid scores.  Additionally, both players play positions with relatively high historical “hit” rates, meaning their positional risk is less than most other players.

– Larry Warford I’m not too interested in, though Guards have a very high “hit” rate.  His positional score is relatively low, and it’s near impossible for a G to become an “impact” player anyway.  He might have a good career, but it’s going to be difficult for him to become good enough to count as a big “steal” in the draft.

– Tank Carradine is another player with injury issues.  It’s interesting, though, that he did not fall nearly as far as Williams or Allen.  That tells me he received a much better report from team doctors than the other players did.  If Tank is healthy, he can absolutely be an “impact” player.  He’s not a great fit for the Eagles, so I don’t mind passing on him, but he can also be looked at as an “impact” player that was taken in the 2nd round.  However, since the medical risk is real, even if he pans out it will be unfair to say he was a “value” pick.  Just because a player avoids the risk associated with him doesn’t mean the risk wasn’t real.

I’ll be closely tracking the progress of these players throughout next season.  While one season won’t be enough to judge each pick, we’ll likely be able to knock a few off the list one way or another.  Hopefully, after watching this class play out, we can adjust the model or create a new measure that will help us identify “steals” as easily as we’ve identified “reaches”.