No great insights today, but I will give you a few charts to look at.  After yesterday’s post, I decided to go through and chart the Eagles’ performance over the last 10 years with several different statistics.  Each chart tells a piece of the “Andy Reid Era” story, some of which we’ve covered, some of which we haven’t. 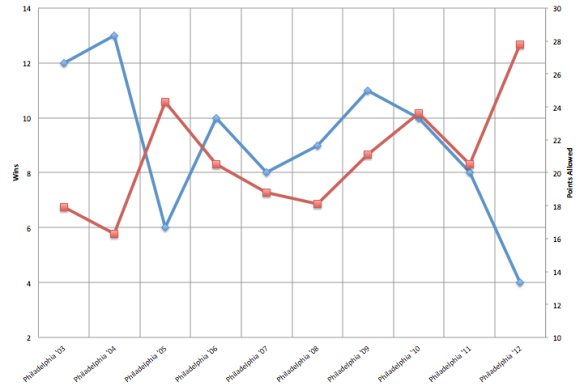 Given what we know about the correlation between Point Differential and Wins, we should expect to see something resembling an inverse relationship here (i.e. PA goes up = Wins go down).  We do see some of that, but from ’06-’09 that relationship doesn’t hold.  The biggest takeaway here is just how bad (and anomalous) last year’s performance was.  From 2003 to 20011, the average Points Against for the Eagles was just 20.11, with a high of 24.3 in 2005.  Last year the team allowed 27.8 points per game, more than a full touchdown per game over the long-term average.

UPDATE: I added the same chart below, but reversed the secondary Axis to make it a bit easier to read (thanks to a commenter).  Here, we should see a positive relationship.  Again the takeaway is that we see a bit more deviation than we’d expect, especially from ’06-’09 (and from 2010-2011). 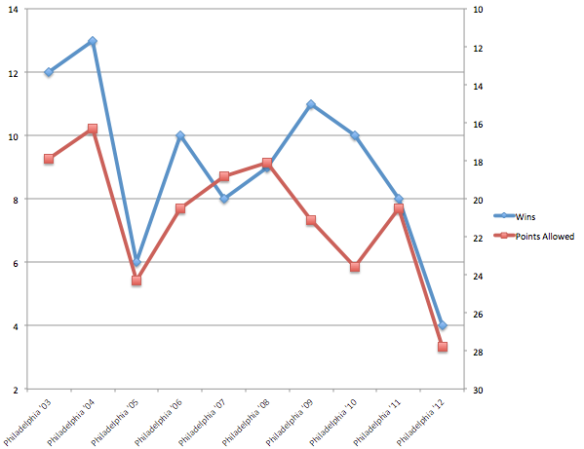 How about Points For (Wins are the blue line again): 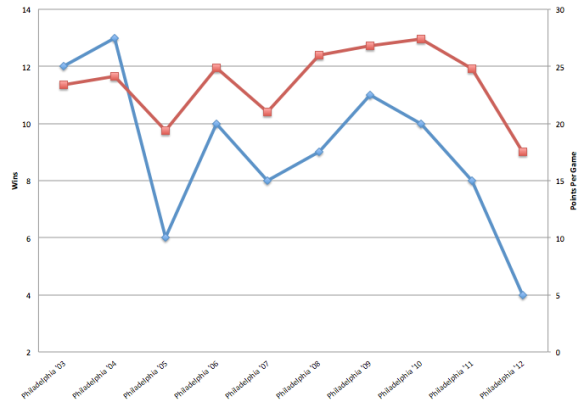 Here the relationship we expect to see (positive), is much clearer and more consistent.  While they are both strongly correlated with winning, Points For/Wins is, in fact, the stronger relationship.

This should be somewhat encouraging to Eagles fans, since Chip Kelly is an “offensive” coach, and the team used its top draft choices on that side of the ball.

Remember, based on the last 10 years, having an above average offense is a NECESSARY condition for winning the Super Bowl.  Having an above-average defense IS NOT.

Here is a slightly different chart.  This shows annual turnovers forced and surrendered. 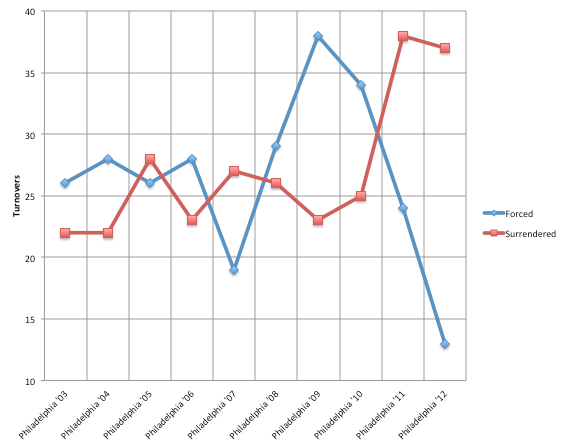 As I covered yesterday, the 2011 and 2012 Eagles performed far worse than the team’s long term average.  Last year, in particular, reflects significant outliers for both measures (negatively), which led to the historically bad TO Differential.

Speaking of TO Differential (I know I’ve spent a lot of time on it), here is the histogram for all teams from 2003-2012.  The red bar is where the 2012 Eagles are located.  I may have run this chart before, but it’s ridiculous, so I’m doing it again.  Remember, the whole sample includes 320 seasons.  The height of each bar (the Y-Axis) represents how many teams finished a season with that TO Differential. 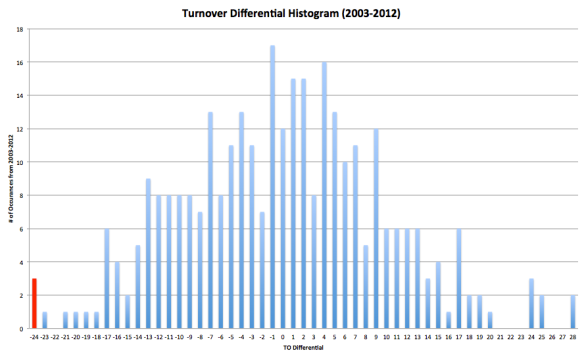 Click to enlarge.  That’s what I mean when I say historically bad.

Now that I’ve figured out how to do reasonable histograms in the new Excel (Microsoft took away the statistics tools), I hope to make a few more that will provide a good visual illustration of just how bad/good the Eagles of 2012 were.  I’ll also run them for Andy Reid’s better years, which will give us an idea of just how good the team was when it “peaked”.

4 thoughts on “Fun with Charts”