Today is the first installment of a series of posts about 4th Down Decision-making in the NFL.  These are going to be a bit long, but extremely interesting for fans interested in the high-level analysis of the game (which should be just about everyone who comes here).

I’ve broken the entire analysis down into 3 parts:

Part 3 (Wednesday) will show the results for individual coaches and discuss potential implications of the entire analysis.

Also, by way of qualifications, Jared is a:

– Two-time Jeopardy champion, and the man who brought Family Guy to life in Final Jeopardy.  You can buy his e-book about the whole experience for just $0.99 here.

– MBA from the Booth School of Business at the University of Chicago, now a management consultant at Booz & Co.

– Play-charter for Football Outsiders for the 2012 season

Always double down on eleven.

It’s a rule of thumb any blackjack player will tell you.  Applicable in almost every situation, at any casino, when your cards come up eleven and the dealer isn’t showing an Ace, you double down.  No matter how much you’re betting, no matter how bad your luck has been, no matter which random foreign country your expressionless automaton of a dealer is from, you double down on eleven.

Because it gives you the best chance at winning.

And how do we know that doubling down gives you the best chance at winning?

Because people have researched it.  People have done their homework, complete with statistics programs, random number generators and complicated looking equations (or as its known in some parts of the country, “witchcraft”)

They even have a card which tells you what to do.  Since Blackjack is a game with well-defined rules and structure, there can be a clear strategy that, if executed, will help you win as much as possible (or, to be technically accurate, help you lose as little as possible).

While you don’t have to do what the card tells you, it’s definitely more right than your ‘gut’ instincts or homebrewed system.  It’s based on data.

Yet, some players will insist on hitting their 12 against a dealer 6.  They’ll refuse to double down on 11.  They’ll split 10s!

So how does this relate to football?  Well, I was wondering if NFL coaches are doing the exact same thing, eschewing data in favor of their own gut.

What I found was a little surprising.

Now, football is a complex game, with a lot of situations and decisions.  For this analysis, I decided to focus on what has long been a frustrating aspect of many Sundays spent with the Red Zone channel…Fourth Downs.

That shouldn’t come as a shock.  Fourth downs are the most direct view into a coach’s risk tolerance and personal philosophy.

And in thinking back to my blackjack discussion, I wondered what NFL coaches would look like if there were an optimal strategy for fourth downs.  There’s already a chart for when you’re supposed to go for a two point conversion.  If there were a basic strategy 4th down card, how would coaches perform when compared them to it?  How close would they be to the best strategy?

That is to say, do these coaches know to double down on eleven? Or are they the guy sitting at the table refusing to split their pair of eights?

In these articles, I’ll describe the methodology behind the analysis, illustrate some results, and discuss some of the implications.

To start things off, I wondered if anyone had already done research into optimal fourth down strategy.  I know lots of smart football fans out there have already spent time on it, so I figured it would already be established in the literature (and would save me the time of having to establish it).

Turns out it has been, and we’ll get into it in some detail, but before we get to that, we need to just establish the foundation for such an optimal strategy chart.  And that means some background in the idea of expected points.

Originally conceived back in the 1980’s, expected points has gained a fair amount of traction with the football analytics community.  Even ESPN uses it.  Here’s a little bit of their explanation, which I’m cribbing because it’s clear.

Based on statistical analysis of 10 years of NFL play-by-play data, ESPN has created a formula that assigns an “expected points” value to the team with the ball at the start of each play based on the game situation. Expected points (EP) accounts for factors such as down, distance to go, field position, home-field advantage and time remaining.

The value it puts out is on a scale from about minus-3 to 7, and it basically represents “which team is likely to score next, and how many points?” It represents the likely points not just on the current drive but also on the next drive or any subsequent drive until the score changes or the half ends. A lower value indicates a more favorable situation for the defense (i.e. fourth-and-20 from your own 1-yard line could be close to minus-3 EP), and a higher value represents a more favorable situation for the offense (i.e. first-and-goal is generally worth 6 EP).

Essentially, expected points is a way to evaluate football situations against each other.  Because each play is based on its situation (what down it is, field position, and how many yards to convert a first down), expected points serves as a normalized metric for the value of possession in any situation.  What’s more, is that after a play, you can compare the expected points values from the old and new situations, and determine how valuable the play was.  Here’s an example from ESPN’s explanation:

From your own 20-yard line, an 8-yard gain on third-and-10 is worth about minus-0.2 EPA because you don’t get a first down; the same 8 yards on third-and-7 is worth 1.4 EPA for converting a long third down and keeping the drive alive. EPA knows that not all yards are created equal.

So, using expected points as our basis, we can compare the best option (what would create the most expected points increase) for any given fourth down situation.  And when I say we, I mean Brian Burke.

Burke has already done a fair amount of research on the optimal fourth down strategy, which I’ve leveraged as the base for this analysis.

Using expected points values and historical data, Burke has done some prior research on what the ‘optimal’ fourth down decision should be (FG, punt, or going for it).  Depending on your field position, and yards to go, he put together a view of what decision would be best for a given fourth down.  His chart of that strategy is below: 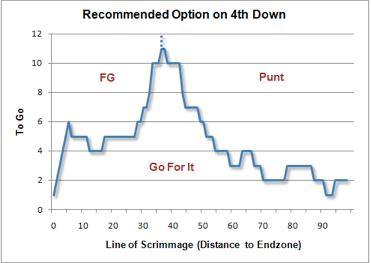 This chart can serve as the basis for our basic fourth down strategy chart.

Put another way, based on my rough transcription, it would look something like this.  Apologies for the lack of labels, but:

– Together, cell 2 x 2 means shows the correct decision when faced with 4th and 2 from your own 2 yard line. 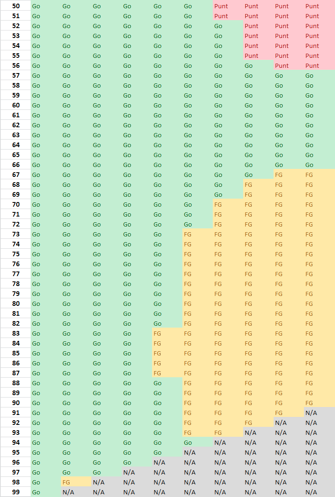 Looks just like a blackjack strategy card, doesn’t it?

Note that there are a few strange suggestions in the card which are most likely just statistical anomalies that will disappear with more data.  The most obvious example of this is cell 2 x 98 (or what to do when faced with a 4th and 2 from the opponents 2 yard line).  That chart says kick the field goal, but it makes very little sense to kick from the 2 yard line while going for it from the 1 and 3-6 yard lines.

Also, in practice, teams could adjust the card each week to account for the relative strength of the opposing defense.  If you’re playing a very weak defense, you’re odds of converting 4th downs goes up, so you’d see a few more Green blocks above.

Now that we have an “optimal strategy”, or at least a “default”, we can compare it to real life decisions and see how often coaches make the right call.  Come back tomorrow for the results in Part 2.