Today we look at the defense.  Here are the best defenses since the 2000 season, adjusted for league average scoring.  Yellow teams are Super Bowl Winners, Red are Losers, and I’ve highlighted the Eagles in Green.

Whoa…a lot more yellow than the offensive table.  Also, we can clearly see the Andy Reid Peak here.  While McNabb was the face of the franchise, the defense is what really carried the best Reid teams.

Again, this isn’t much different from our pervious look (which didn’t adjust for points inflation).  However, it seems pretty clear from that table that a GREAT defense can go a very long way towards winning a Super Bowl.

Notice also that the 2002 Bucs are at the very top of the list.  I’ve said before that the 2002 Eagles were the best of all the Andy Reid teams.  Unfortunately, it ran into a historically great defense that year.  Is it possible that single game led to a Reid overreaction and strategic shift away from the defensive focus that led to so much success?   Yes, yes it is.

After that game, everyone talked about how inept the Eagles offense was.  Meanwhile, it’s quite possible (likely?) that the Bucs that year would have shut down ANY offense.  They were that good.  However, I’ve talked about that before.  Back to today’s topic…

Similar to yesterday’s table, here are the past ten Super Bowl winners and their defensive performances: 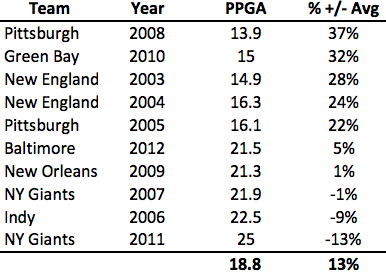 For reference, here is the offensive chart for Super Bowl winners: 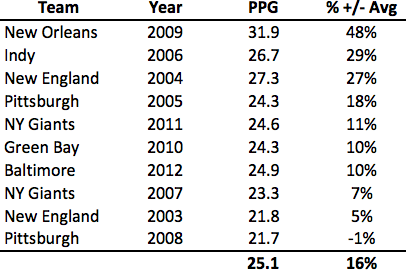 Also interesting to note is the fact that the only Super Bowl winner with a negative offensive performance (the 2008 Steelers) had a historically great defense (37% better than league average).

What about the Super Bowl losers? 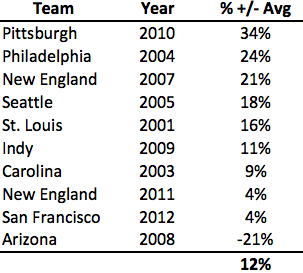 Strong performances again.However, we also see that, while defense is clearly important, it is not necessarily mandatory.  The Arizona Cardinals of 2008 were 21% below league average on defense and still managed to come within a Santonio Holmes tip-toe of winning the Super Bowl.

Lastly, here is a chart of the past 10 Super Bowl Winners showing their defensive and offensive performance.

At first glance, it doesn’t look like a huge difference, though average offensive performance is better by 3%.  However, if we look at the minimums on both sides, we get a clearer picture.

After all that, our original thesis stands:

– An average offense (or something extremely close to it) is required to win the Super Bowl.

– An average Defense, while certainly helpful, is NOT required.

Teams should focus on the offensive side of the ball until they’ve met the average threshold, and then turn towards maximizing defensive performance.

P.S. The table above also makes it extremely clear that the Giants teams that won in 2007 and 2011 are, BY FAR, the weakest winning teams of the last decade.  I’m not sure if that makes me feel better or worse, but it supports my assertion that those teams were largely lucky, and not good (not that it matters).