We’ve still got 2 more preseason games and a couple of weeks before the official start of the season, but I think it’s time to actually game out what this season might look like.  I’ve said several times that I think this is a “natural” 8-9 win team (closer to 8).  However, that prediction was essentially made in a vacuum.  Now it’s time to put some real evidence behind it.  To do this, I’m going to use Pythagorean win probability, using base-case/upside/downside assumptions for both the offense and defense.

Tomorrow, I’ll take a look at the actual schedule and try to discern where, exactly, the Eagles wins SHOULD come from, setting benchmarks along the way so we can check in during the season and see how the team is doing (rather than overreact to short 2-3 game stretches).

For this analysis, we need to project how good both the Eagles offense and defense will be.  I’m going to discuss this in terms of percentage +/- league average (same look we’ve talked about before).  In both cases, we’re looking at Points (points for and against).

First, the offense.  How good can the Eagles be?

Let’s start by looking at the team’s recent performance.  Here is a table showing the previous 5 seasons:

As you can see, the Eagles offensive production was very good over that time period.  Last season was very bad, but it stands out as an anomaly.  The offensive line was destroyed by injuries, and the Eagles best offensive player (Jason Peters, maybe 2nd best) was hurt before the season even started.  This year, the O-Line looks to be healthy (crossing fingers), plus the team has added Lane Johnson, the 4th overall pick in the draft.  Couple that with Chip Kelly’s expertise and the performances we’ve seen in the preseason thus far, and I think it’s fair to say we expect the offense to be closer to the ’09 and ’10 teams than last year’s.

Remember, we’re using 3 different cases here to get a range of expected win values.  For the offense, I’m going to set them as follows:

Upside – +30%.  Not expected, but that’s why it’s the UPSIDE case.  The 2010 Eagles were +20%, and with Chip Kelly at the helm and many of the same skill players, it’s not ridiculous to think the team could be slightly better.

Downside – +5%.  Note that we are looking at the “Downside”, not the “disaster” case.  Simply put, unless the team suffers injuries to multiple offensive stars, I don’t see any way it finished below league average in points scored.  The team finished below average (<0%) just 3 times during Andy Reid’s tenure, and I expect that type of consistent offensive output to continue with Kelly.

As every fan knows, this is the side of the ball that will likely determine whether the Eagles are a playoff contender or not.  As I showed on offense, here is the defensive performance, relative to league average, over the last 5 years:

Obviously, the defense is much harder to project.  Last year was terrible, but remember that was also greatly effected by the historically bad turnover results as well as awful special teams.  Special teams looks to be improved, and, statistically speaking, it’s close  to impossible for the team not to rebound significantly in turnover margin.  That’s a long way of saying that we should expect improvement from last year, though how much improvement is a big question.  As it is, my assumptions are:

Upside – +5%.  Not likely, but it’s within the realm of possibility that the Eagles will be slightly above average on Defense this year.  While preseason isn’t always a great indicator, it looks like the D-Line will be a bit better than I expected it to be.  The LBs are a question, but Mychal Kendricks could certainly take a big step forward this year.  Also, it looks like Patrick Chung has plugged one of the gaping holes at Safety (for at least part of the season while he’s healthy).  Bradley Fletcher looks good at CB, as does Brandon Boykin, who’s positioning himself as a contender for the biggest surprise on the team.  If what we’ve seen so far continues, then average-slightly above average is a reasonable upside case.

Base Case – -5%.  Slightly below average.  Say the words while picturing this year’s defense and I think you’ll agree it sounds about right.  If we start from last season’s performance (-22%) and factor in improved field position and turnovers, then add a less than catastrophic defensive backfield, and it’s reasonable to expect the team to move from very bad on defense to purely mediocre (on the negative side).

Downside – -15%.  This one’s easy.  Last year the Eagles were -22%.  Just about everything that could go wrong, did.  I just don’t see any reasonable scenario that results in the team being as bad or worse than it was last season.  In fact, taking the exact same quality of performance and adjusting for better turnover luck would itself lead to relatively large improvement, hence the downside case of -15%.

So where does that leave us?  Here’s the summary matrix:

Now we need to translate that into points, then we’ll use the Pythagorean Win Probabilities to calculate or expected win range.  What should we expect the league average to be?

Last year the average was 22.7, but as the chart shows, we should expect an increase this season.  The average annual increase over that time period is approximately .2 points per game.  Therefore, we’ll use 22.9 as our expected average for this season.

So, using the values in our matrix, we get the following:

This chart gives us 9 potential values given our assumptions for this season.  Here they are, with expected wins included. 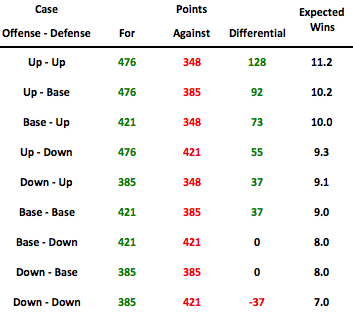 The average win expectation is 9.1.  I guess I need to shift my expectations upwards.  Tomorrow, I’ll use the actual schedule to see whether the Eagles will win as many games as this analysis suggests.  However, the overall message is this: the proper expectation for Eagles fans is a team that contends for the division and at least wins a Wild Card spot.

14 thoughts on “Projecting the Eagles 2013 Record”