Just minutes to game time, so I’m coming in just under the wire with my full season projection.  For reference, here is last year’s projection.  Let’s first revisit that, then I’ll get to this year.

If you remember, I did a fairly basic expectations matrix using Points Scored and Points Against.  With those values, I used the Pythagorean Win Expectation for each, then took the average of all scenarios, eventually arriving at a projection of 9.1 wins.  Here is the chart from last season:

My base case projection was 421 points scored, 385 points against.  In reality, the Eagles finished with 442 points scored and 382 points against.  That’s an incredibly close result.  I, of course, will almost certainly not be that accurate again this season (regression flag!).  Still, it provides at least some evidence that I know what I’m talking about, so I like highlighting it.

Now, about this year:

First, we need to know the league average.  Remember that we’re using that as a benchmark and using relative performance around that measure to arrive at our Points projections.  Well, in 2013, there was an average of 23.29 points per game scored by each team.  Over 16 games, that equates to 372.65 points per game.  However, we need to adjust for inflation.  Over the past decade, scoring has increased at a fairly steady rate of .2 points per game. Last season actually saw a much larger increase (.6 ppg jump), but without more data we need to stick with the longer term trend.  Adjusting for inflation gets us to 23.49 points per game for each team.  That gets us to an average of 375.84 ppg per team.

So how will the Eagles do?

As I’ve done before, I’m going to focus mainly on Offense and Defense.  Special Teams does play a role, but it’s relatively small and, perhaps more importantly, very hard to predict.

On offense, things are pretty simple from where I sit.  The Eagles upside for this year is their performance from last season.  Some might argue there’s room for improvement, and there definitely is.  However, so many things went right for the Eagles on offense last season, and the team was SO good, that it’s unreasonable to expect them to exceed that level this year.  Additionally, the team lost DeSean, is likely to see a few more injuries this year, and will almost certainly suffer some INT regression.  Therefore, meeting last year’s performance is within reason, but definitely optimistic. Since it’s an upside projection, we can allow for some improvement, but I just don’t see any way to objectively expect much. Last year the team finished +18.6%.  For our upside this year, I’ll round that up to +20%.  It’s somewhat unlikely, but within reason that the Eagles will be very slightly better this year than they were last year on offense.

On defense, our assignment is much less clear.  There are a lot of young players that might grow into much better players this season.  There’s also the fact that this is now year 2 of the 4-3 defense, which should lead to more comfort.  The team added Malcolm Jenkins at Safety.  While he’s not a great player, he should still be an upgrade (potentially large one).  On the flip side, the older players can be expected to regress, but for the Eagles that’s not that big of a factor.  It’s not as if Trent Cole was a star last season.  I’m definitely worried about Demeco Ryans, but moreso regarding the injury risk he presents.  If he or Barwin goes down, the Eagles are in trouble.  For an upside case, though, we can assume they stay healthy.  In light of that, some improvement from last season (-2.5%) is in order.  For an upside assumption, I’ll set the defense at +10%.  That’s definitely bullish, but it is an upside case, and if certain players develop I can absolutely see the Eagles hitting it.

My base case on Offense sees the Eagles suffering a little regression.  As I mentioned above, Foles really can’t be as good as he was last season, the loss of DeSean will hurt the PA game, and the offensive line won’t be as stable.  The good news is that Chip Kelly is still the coach and Shady is still the running back.  With those two on board, it really shouldn’t be difficult to field a good offense.  Meeting last year’s performance (+18.6%) , though, is unlikely.  Dialing that in a bit, I’m setting my base case offense at +13%.

On defense, last season is a good benchmark.  The roster hasn’t changed too much, at least at the top.  There’s better depth as well, though obviously still a few holes.  Last year’s team wasn’t particularly lucky, so there’s not much regression to factor in.  All together, modest improvement is our most reasonable expectation.  That puts us just above league average.  For an assumption, I’ll set the base case defense at +2.5% (a relative improvement of 5% over last season).

Now for the messy stuff.  What could go wrong?  Well…a lot.  While we’re not concerned with true tail risk (Foles/Shady getting hurt), we do need to look for negative events/scenarios that are reasonably likely to occur.  On offense, this means Foles regresses more than we’re hoping.  Health regresses past the mean and the team suffers worse than expected.  Jeremy Maclin doesn’t provide anywhere near the impact Jackson did and the young WRs/TEs aren’t quite ready to fill the void.  Those are all very plausible outcomes, but they’re unlikely to all occur.  One or two of them will leave the team worse off, but I still think that puts them above league average.  Worse than that is definitely possible, but that’s too negative for our projection here.  Hence, our downside case on offense will be +5%.

On defense, things are fairly static, for reasons explained above.  Not much has changed.  There are still a lot of weaknesses though, which means our downside case can’t be too rosy.  There’s no guarantee that players like Cox, Kendricks, Logan, Boykin, etc. will get better.  If they don’t, then a single injury could leave the Eagles worse off on defense than they were last season.  Demeco Ryans is a prime candidate for decline, and depth behind him isn’t good.  If those things happen, we’re not looking at the absolute catastrophe we saw in 2012, but it will still be pretty bad.  Last year the Eagles were 2.5% worse than league average in Points Allowed.  I’m setting the downside this year is -10%.

All together, this is what our projections look like:

For reference, this is what last year’s looked like:

The comparison is interesting, and really highlights the reasoning behind the projections. Offense is much more certain than last season.  I might be too pessimistic in our downside scenario this year, but I really do see a lot of risks.  I also think Jackson is a bigger loss than most fans realize.  Time will tell if that’s correct.  On defense, things look very similar.  We’re expecting modest improvement across the board, and that is reflected in each one of our assumptions.  Overall the range of outcomes on defense is very close to last year, but the mean expectation has improved.

Using our assumptions, we get the following potential outcomes.  Remember that we’re using Pythagorean Wins here with an exponent of 2.67: 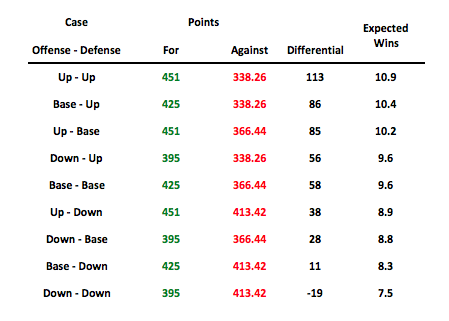 There it is.  Your 2014 projections.  The average outcome is 9.3 wins, which I think is still good enough for the division title.  Note that there are a lot of very reasonable scenarios where the Eagles fail to win 9 games.  As I’ve said previously, I think this season is going to  be much less fun than last season, albeit with similar results.  Expectations have shifted, and they’ve shifted too fast in my opinion.  The team is still building and there are still a lot of holes to fill.  I’d love to see a 12 win season where the Eagles run away with the division and make a deep playoff run, but that’s not an objectively reasonable expectation given what we know right now.

One last note: this is by no means a reflection of all potential outcomes (not even close).  What I am really trying to do is provide an outline for the middle of the Eagles expected performance distribution.  That way we can set our expectations and use it to guide our thinking as the season progresses.  In light of this, an 8 win season really isn’t bad, but my guess is many people would be very disappointed by that.  If Foles/Shady go down, 5-6 wins is a possibility.  If the Eagles get lucky, 12-13 wins is doable.  For a base-line expectation though, I’m sticking with what you see above.

With just minutes to spare, my season projection is:

9.3 wins, and a fan base with very mixed feelings.